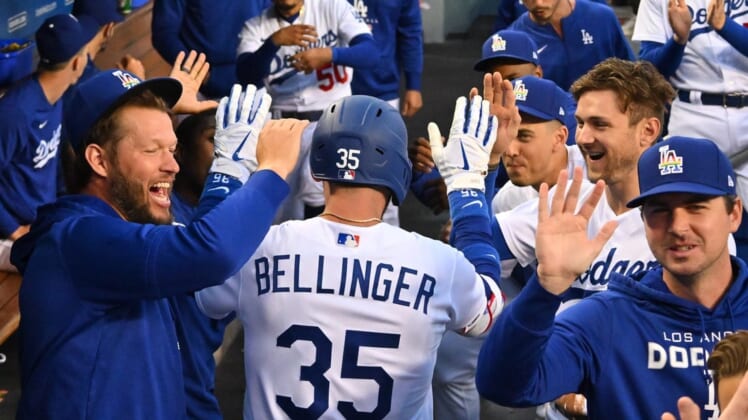 Los Angeles’ Trea Turner had an RBI single among his two hits to extend his major-league-best hitting streak to 26 games. Chris Taylor added a home run as the Dodgers improved to 2-0 in a four-game series between the top two teams in the National League.

Pete Alonso homered for the Mets, who have failed to build on a six-game winning streak they took into a 10-game California road trip that also include will games against the San Diego Padres and Los Angeles Angels.

New York’s Francisco Lindor went 0-for-4 and saw his streak of 10 consecutive games with an RBI come to an end.

The Dodgers got their offense started in the second inning when Justin Turner led off with a single. Bellinger followed with his sixth home run of the season and his first since May 12.

In the fourth inning, Bellinger reached base on a fielding error by Mets third baseman Eduardo Escobar, and McKinstry belted a one-out home run to right field, his first of the year, for a 4-0 lead. McKinstry was called back up to the major leagues Thursday.

That run support was more than enough for Anderson, who delivered in his third consecutive scoreless outing. He also extended his personal scoreless streak to 26 innings, going back to a start against the Arizona Diamondbacks on May 17.

Anderson (7-0) allowed three hits and no walks while striking out five. He leads the major leagues in wins, and he lowered his ERA to 2.59.

On the first pitch from the Dodgers after Anderson left the game, Alonso hit a home run deep into the left field seats against right-hander Yency Almonte, his 14th of the season.

Trea Turner’s RBI single came in the seventh inning to give the Dodgers a 5-1 lead. Taylor added a solo home run, his sixth homer of the year, in the eighth.