Dodgers get jump on Tigers, hold on late 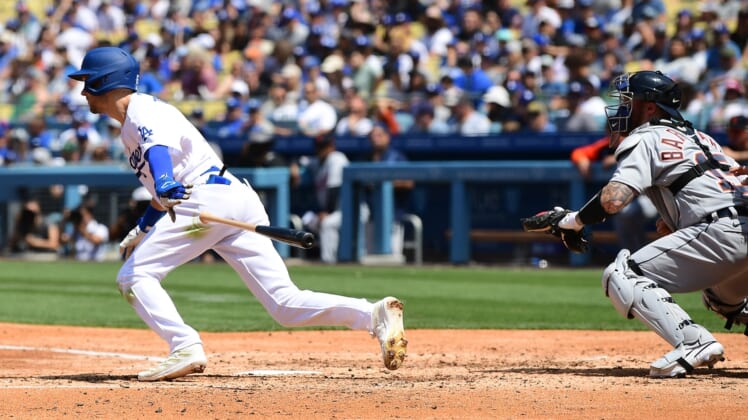 Walker Buehler tossed five shutout innings and Mookie Betts scored a pair of runs as the Los Angeles Dodgers earned a 6-3 victory over the visiting Detroit Tigers on Sunday.

The Dodgers improved to 8-2 at home this year, while winning two out of three in the interleague series against Tigers.

Miguel Cabrera and Jeimer Candelario each hit a home run for Detroit, which has lost seven of its last eight games and went 1-5 on a six-game road trip.

The Dodgers took a 1-0 lead in the first inning on an RBI single to right by Will Smith and added three more runs in the second to take a 4-0 lead.

Following singles by Hanser Alberto and Gavin Lux with one out in the second, Alberto scored on a throwing error by Candelario at third base after a ground ball by Betts. Freddie Freeman laced an RBI double to center to score Lux and Betts scored on a ground out by Trea Turner.

The Dodgers increased their lead to 6-0 in the sixth inning, getting the first run on an RBI double by Cody Bellinger, who later scored on a fielding error by Detroit shortstop Javy Baez. Bellinger’s hit ended an 0-for-21 spell.

Buehler (3-1) went five innings, throwing 92 pitches, while allowing six hits with five strikeouts and one walk. It was his first appearance since throwing a complete-game shutout Monday at Arizona.

Buehler stranded five runners in the first two innings, striking out Baez with the bases loaded to end the Tigers’ threat in the second inning.

Detroit finally got on the board in the eighth on Cabrera’s two-run home run, his first. Candelario hit a solo home run in the ninth, his first, and the Tigers brought the tying run to the plate with two outs. But Los Angeles closer Craig Kimbrel induced a popout from Austin Meadows for his fourth save.

Right-hander Tommy Kahnle pitched a perfect sixth inning for the Dodgers in his first major league appearance since 2020 after undergoing Tommy John surgery.