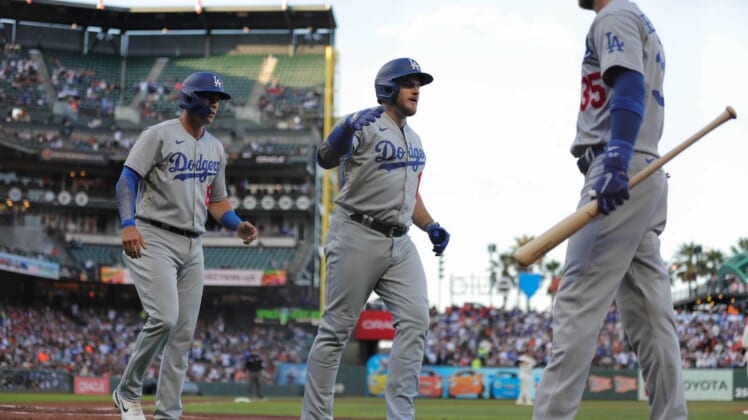 Max Muncy blasted a home run off Logan Webb, left-hander Andrew Heaney combined with five relievers on a five-hitter and the visiting Los Angeles Dodgers earned an 8-2 victory over the San Francisco Giants in the opener of a four-game set Monday night.

Trea Turner also homered for the Dodgers, who beat the Giants for a fifth straight time, including four in a row at home coming out of the All-Star break.

Wilmer Flores homered for the Giants, who fell 18 1/2 games behind the first-place Dodgers after beating them by one in a classic National League West race last season.

Muncy’s homer, a two-run shot, came with two outs in the second inning and gave the Dodgers a 2-1 lead after the Giants had gone up in the first on a David Villar bases-loaded walk. Muncy’s 10th homer also plated Jake Lamb, who had singled.

The Dodgers began to pull away with a three-run third that was ignited by a James Outman single and Mookie Betts double. Turner followed with a sacrifice fly, Freddie Freeman hit a single and Will Smith slashed a double, each driving in a run to create a 5-1 cushion.

In his second start since returning from a second injured-list stint with a sore shoulder, Heaney worked four innings and limited the Giants to just one run and four hits. He walked two and struck out seven.

Newly acquired Chris Martin pitched the fifth inning, during which Flores homered, his 16th of the season. Caleb Ferguson (1-0) then threw a 1-2-3 sixth, for which he was awarded the win.

The Dodgers added single runs in the fifth on Smith’s second RBI double, the seventh on Turner’s 17th homer of the season and ninth on Freeman’s third hit of the game, a run-scoring single.

Webb (9-5) was pulled after five innings, charged with six runs on eight hits. He walked one and struck out two.

Freeman finished with a double, two singles, two RBIs and two runs for the Dodgers.

Flores and Luis Gonzalez had two hits each for the Giants, who were outhit 11-5.