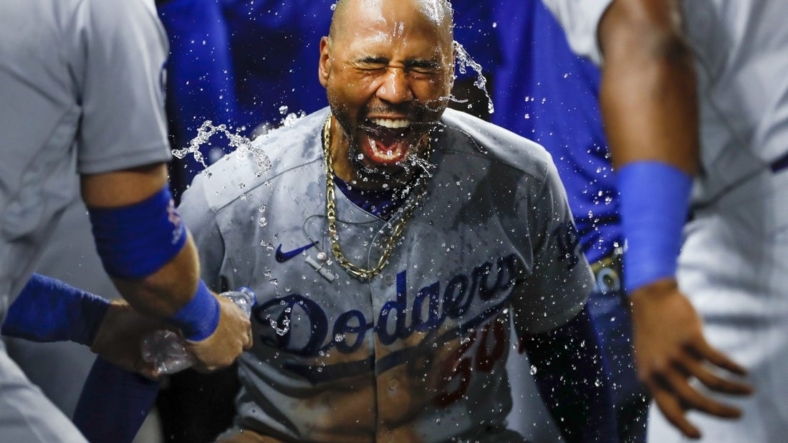 The Miami Marlins and visiting Los Angeles Dodgers, who will meet again on Saturday evening in the second game of a four-game set, don’t have much in common.

Miami fell out of playoff contention long ago and has dropped two in a row and six of the past eight.

On Friday, the Dodgers opened the series by beating the Marlins 10-6 in 10 innings behind Mookie Betts, who went 4-for-6 with two homers, a double and four RBIs.

The Dodgers have won all four meetings with Miami this season, all in the past eight days.

In fact, perhaps the only thing the teams have in common is that there is no real pressure on either squad. The Dodgers are cruising to the playoffs, and the Marlins — at least from the fans’ perspective — are looking to 2023.

However, Los Angeles manager Dave Roberts said that even with his team holding a 19 1/2-game lead in the National League West, there is always the will to win.

“When you look at our clubhouse, we have 26 players who are focused on being in the moment,” Roberts said Friday. “I think that’s been the secret sauce of how we’ve continued to play well throughout the season.”

Meanwhile, the Marlins are in another rebuilding mode. On Friday, they designated veteran first baseman Jesus Aguilar for assignment.

“The biggest thing is that we’re giving (Aguilar) the chance to catch on with a team that has a chance to make the playoffs,” Marlins manager Don Mattingly said. “Jesus has been really good for our young players. He was good at balancing having fun with getting down to business on the field.”

Los Angeles will start right-hander Dusty May (1-0, 0.00), who is just back from Tommy John surgery.

The Marlins are 17 games under .500 overall but are 15-10 when they start Alcantara, who nonetheless took a loss in his most recent outing. On Sunday against the Dodgers in Los Angeles, he allowed season highs of 10 hits and six runs in a season-low 3 2/3 innings during a 10-3 defeat.

Alcantara leads the majors with 176 2/3 innings pitched this season. The length he normally provides the Marlins will be badly needed on Saturday because Miami went with a bullpen day for 10 innings on Friday, using eight pitchers.

May made his season debut on Aug. 20, beating the Marlins 7-0, showing no signs of rust from a 475-day layoff. He allowed just one hit, two walks and no runs in five innings, and he struck out nine.

“Super exciting,” May said. “Excited to be back, and I’m just glad to get the first one out of the way and know that the first one’s behind me and that I came out of it healthy and strong and ready for my next one.”