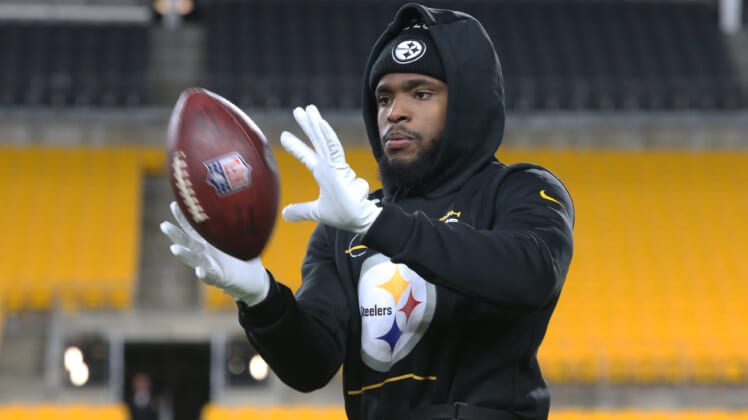 The Pittsburgh Steelers struck gold in the 2019 NFL Draft, landing wide receiver Diontae Johnson with the 66th overall pick. He’s become an important piece in the Steelers’ offense, but a contract dispute could lead to some drama this offseason.

Johnson is entering the last year of his rookie contract and he wants a new deal. He is one of the most underpaid starting receivers in the NFL, at a time when the highest paid NFL players are largely pass-catchers.

The 25-year-old wants to remain in Pittsburgh, sticking with the team that drafted him and a coaching staff he is familiar with. However, contract negotiations with the Steelers haven’t gone well and that’s pushed the 25-year-old to sit out organized team activities, per Mark Kaboly of The Athletic.

It’s a crucial time in the Steelers’ preparation for the 2022 season. New quarterbacks Mitch Trubisky and Kenny Pickett use these practices to start developing chemistry with the receivers and getting their timing down.

Unfortunately, Johnson will run out of leverage quickly. Once training camp arrives in July, the Steelers can fine him for every mandatory practice he misses. The mandatory fines would rack up quickly, costing him a significant chunk of his 2022 salary.

If the Steelers want to sign Johnson to a long-term deal, they can easily afford to do it. Pittsburgh is operating with $12.46 million in cap space this year and will have nearly $60 million to spend in 2023, per OverTheCap.com.

However, the organization does things a certain way. As Kaboly points out, Pittsburgh will set what it perceives as the market value for Johnson and it won’t go above that figure. If Johnson wants more money, he’ll have to find it in free agency.

This isn’t going to be a Le’Veon Bell situation. While Johnson wants a long-term deal, he also reportedly recognizes that he needs to play to get paid.

“He knows if an extension isn’t agreed upon by the Sept. 11 opener, he will likely play the season without any security of a long-term deal as he heads into free agency.”

Considering Pittsburgh spent second- and fourth-round picks on wide receivers, it’s very possible this will be Johnson’s last season with the Steelers. If he becomes a free agent in 2023, there will be plenty of interest in this offensive weapon.