Did the Heat Lose Their Best Player and Coach in LeBron James?

There is no tangible evidence that the best Miami Heat coach left town simultaneously along with their best player over the summer of 2014. However, as the Cavaliers continue their ascent  toward the playoffs, the Miami Heat show a painful descent into virtual irrelevance and non-participation in the 2015 NBA Playoffs.

In all sports teams, physical injury becomes a major player in the individual annual march to immorality. For Miami basketball, the narrative from many will be to blame the team’s disappointing season on the injuries to many key players. However, as South Floridians bask in the sunlight of spring and get a tan, we will be watching playoff basketball in Cleveland for the first time since the King left.

Courtesy of USA Today: The Heat lost more than a player when James returned to the Cavs.

What did the Heat lose in a player in LeBron James, who is widely rumored to hold many of the Cavalier coaching decisions in his headband free cranium?

Historically, the Heat outscored opponents by an average of one point in the third quarter during the 2013-2014 season, but this year were outscored by an average of 2.2 points in the third quarter to opponents in the third—both a reflection of coaching on the bench and on the floor. The Heat has consistently not executed coming out of the tunnel in the second half of games because of both strategy and play on the floor, which leads to….

In-game statistics are both a major source of the physical impact of Lebron and his mental capacity to strategize a game while on the floor, discover the flow, and the players that needed to find rhythm. As Tom Haberstroh tweeted on February 3, “The only healthy Heat position this year, the PG position, was the worst position in the NBA by far.” A little over two weeks later, the Dragic family made South Florida their home. Leadership on the court and “coaching” the players to create spacing on the floor, hit open teammates on the run and making smart, fundamental plays, all left town with one man. Amazingly, the turnover difference season over season is -12. Which means the position didn’t create bad plays, only that they created no plays.

The grueling schedule of the season showcased the benefits of a player in the best shape of his life and the impact he had on the players around him. With the four years of playoff runs that span the absolute full course of an NBA season, plus an Olympics, Lebron coaxed (coached) players to raise their level of physical expectation to match his own otherworldly minutes played. 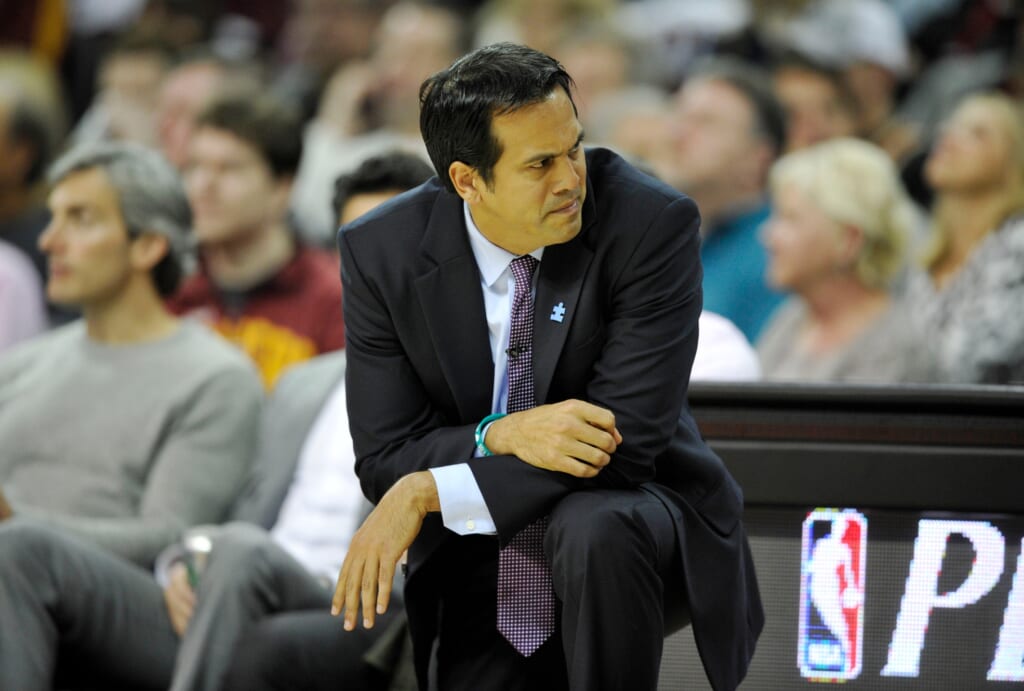 Courtesy of USA Today Images: Spoelstra has seen is all come crashing down on him this year.

The best players in 2014 simply can’t inspire and execute plays while sitting out games. Unlike the past four seasons, the only voice heard on the court, has been that of Erik Spoelstra. Spoelstra is a championship coach whose team has had a torrent of injuries and showed “grit” this NBA season. That being said, his voice has not led to the development or continued play of the younger players, and has not prevented the constant breakdowns in the second half of games.

Predicting that the Heat will be a championship-caliber team next year without knowing if a suitable voice will be heard by both veteran and younger players alike is fool’s gold. Especially when the best player and, possibly, best coach from the previous four years will not be walking through that door.