Did Russell Westbrook fail himself by signing extension?

Russell Westbrook surprised the basketball world by signing a renegotiated three-year, $85-plus million deal with the Oklahoma City Thunder earlier this week.

It’s not as much that the All-Star guard decided to commit to the Thunder. After all, they are now his team with Kevin Durant in Golden State. Instead, it’s all about the timing of said contract.

The logical assumption was that Westbrook would wait until free agency next summer to sign a long-term deal. In fact, reports following Durant’s departure to the Warriors indicated as much (more on that here).

Now on a new three-year deal that affords him the opportunity to opt out following the 2017-18 season, Westbrook is set to earn $55-plus million over the next two seasons. He then has a player option for $30.5 million in 2018-19.

The Thunder were able to offer Russ more than this summer’s max contract moving forward because they had the necessary cap room to absorb it.

Despite this, the MVP candidate did leave some cold hard cash on the table here. He could have let the whole thing play out, and signed a one-plus-one deal next summer.

That would have enabled the guard to earn a max deal taking up 35 percent of Oklahoma City’s cap — a projected cap of $110-plus million.

This would have paid Westbrook about $10 million more next season. That’s a number that’s somewhat mitigated by the increase from $15.7 million annually on his old deal compared to the $26.5 million he’s now earning in 2016-17.

With an ability to opt out following the 2017-18 campaign, Russ really didn’t leave much money on the table. In reality, it equates to less than $2 million when you do the math.

If not the finances, what led Westbrook to make this decision? Was it a smart choice? How does it set both him and the Thunder up over the long term? Here’s a look at these angles.

These words were once uttered by former United States Secretary of Defense Donald Rumsfeld.

They ring truer today in Oklahoma City than ever before after the Thunder signed All-Star point guard Russell Westbrook to a three-year contract extension late Wednesday night.

Westbrook is now a known known, meaning that we know he’s going to be in Oklahoma City through at least the 2017-18 season.

It’s not a known unknown, as it would have been if Westbrook decided to wait until he was a free agent to sign his deal next summer. While this might end up costing the All-Star millions moving forward, it helps us gauge just how productive he’s going to be moving forward.

It also gives him some long-term sense of ease. The guard knows he’s going to be the face of the Thunder franchise for the foreseeable future, something that might not have been the case if Durant decided to return to the team.

“There’s nowhere else I would rather be than Oklahoma City,” Westbrook said during the press conference announcing his new deal, via ESPN.com. “You guys have basically raised me. I’ve been here since I was 18, 19 years old. You guys did nothing but great things for me. Through the good and the bad, you guys supported me through it all, and I appreciate it.”

It’s in this that Westbrook felt like continuity and a familiar organization trumped the entire dynamic that would have been brought forth in free agency.

Not banking on himself?

The only time during his career that Westbrook was asked to shoulder the load without Durant was during the 2014-15 season, a year that saw Oklahoma City miss the playoffs altogether.

With pretty much the same supporting cast last year, the Thunder found themselves one game from earning an NBA Finals appearance.

Russ’s stats during the ill-fated 2014-15 were legendary. He led the NBA in scoring at 28.1 points per game while grabbing 7.3 rebounds and dishing out 8.6 assists per game.

Those numbers are tremendous, but it’s important to note that his effective field goal percentage stood at .455 while he turned the ball over at the highest clip of his career.

Is it possible that Westbrook took one look at the Thunder roster minus Durant and decided he better take his money now?

What if Oklahoma City were to fall off the face of the map in an ultra competitive Western Conference next season? What would that tell us about Westbrook’s ability to be the face of a contending team?

It would have taken a monumental fall from grace for Westbrook to fall out of favor among the Association’s other 29 teams. Even if he struggled big time in a contract year, other squads would have thrown the max at him.

This makes Westbrook’s decision that much more curious. If he’s not concerned about a deterioration of his image or team-wide struggles, maybe it’s injuries that forced the guard to take security over a one-year deal.

Even then, we’re talking about a guy who missed just two games a season ago and has played in all of the Thunder’s games in five of his eight seasons with the team. Injuries have been somewhat of a concern recently, but he’s not an injury-plagued player by any stretch of the imagination. 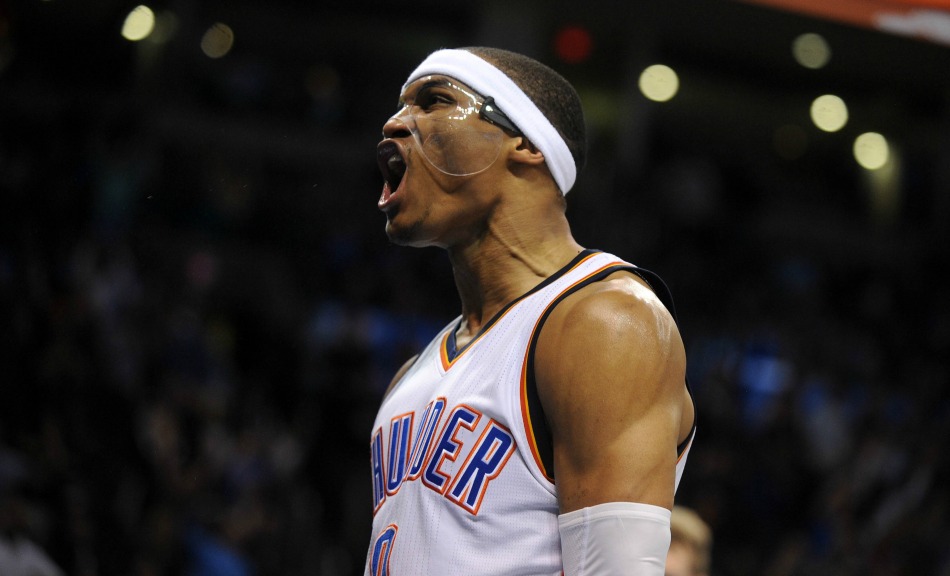 This is the biggest question. Regardless of what apologists out there would want us to believe, Thunder general manager Sam Presti has not done a tremendous job building a contending team.

This was evident last year when the Thunder relied on Westbrook and Durant to do way too much. More than that, the Thunder’ ownership group has proven to be cheap. After all, it traded James Harden away back in 2012 simply to avoid paying the luxury tax.

When your general manager has proven to be less-than-stellar at his job, why give him the benefit of the doubt? When your ownership group has proven to be too cheap, why sign on for that? Those are the questions skeptics of Russ’s new deal will be asking.

These are the questions he will be asking himself should the Thunder struggle without Durant next season.

What we do know here is that Westbrook, unlike his former teammate in Durant, has shown loyalty to the organization. Whether that pays off for him remains to be seen. It is definitely a risk, one that he decided to take.