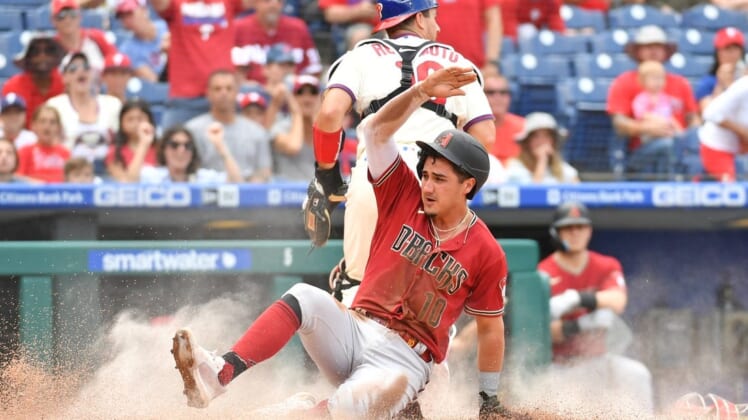 Christian Walker hit a single, double, triple and drove in three runs as the Arizona Diamondbacks cruised past the host Philadelphia Phillies 13-1 on Sunday.

Josh Rojas added two hits, three runs and an RBI, while Alek Thomas had two singles and two RBI for the Diamondbacks, who avoided a three-game sweep. Ketel Marte chipped in with a two-run single and Geraldo Perdomo had two hits.

The Diamondbacks’ Kyle Nelson threw one scoreless inning in his first career start in what wound up being a bullpen game.

Luke Weaver (1-0) gave up three hits and one run in three innings of relief and earned the win.

J.T. Realmuto contributed three hits for the Phillies, who had their nine-game winning streak snapped. Interim manager Rob Thomson lost for the first time after starting 8-0.

The Diamondbacks went ahead 2-0 in the first inning when Pavin Smith hit a soft grounder to Suarez, who threw home, but a fielding error by Realmuto allowed two runs to score. Daulton Varsho added an RBI groundout for a 3-0 advantage.

Realmuto singled with two outs in the fourth and Didi Gregorius followed with a walk. Alec Bohm then hit an RBI single to center to cut the Phillies’ deficit to 3-1.

Walker had an RBI double in the fifth as the Diamondbacks took a 4-1 lead.

The Phillies loaded the bases with two walks and a fielder’s choice with one out in the fifth. Nick Castellanos struck out swinging and Realmuto did the same to end the threat.

Arizona tacked on three runs in the sixth when Rojas hit an RBI single and Walker followed with a two-run single for a 7-1 advantage. Andrew Bellatti also walked Carson Kelly with the bases loaded for an eighth run.

When Marte hit a two-run single in the seventh, the Diamondbacks led 10-1.

Thomas’ two-run single in the eighth extended the advantage to 12-1.