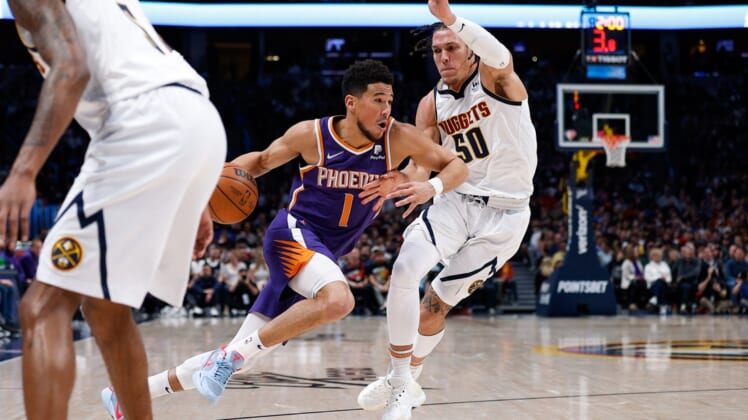 Devin Booker scored a season-high 49 points and added 10 assists, Chris Paul had 17 points and 13 assists in his return to the lineup, and the visiting Phoenix Suns beat the Denver Nuggets 140-130 on Thursday night to clinch the top seed in the Western Conference.

Mikal Bridges scored 22 points, Deandre Ayton had 16 points and Jae Crowder finished with 12 for the Suns (60-14), who have won seven straight.

Paul missed 15 games with a fractured thumb and hadn’t played for the Suns since prior to the All-Star break. He did log two minutes in the All-Star Game.

The teams traded leads in a high-scoring first half, with Phoenix leading by five and the Nuggets up by seven at one point.

Hyland did most of the damage for Denver. He scored 19 points off the bench, including 4-for-6 from behind the arc, to help give the Nuggets a 68-66 lead at halftime.

Things stayed close for the first few minutes of the third quarter before Denver created some distance. Barton and Morris hit 3-pointers, and Morris was fouled on his jumper and made the free throw for a four-point play and an 85-78 lead.

Phoenix took the lead when Bridges’ 3-pointer made it 110-109, then the Suns started to pull away. Bridges hit a pair of free throws, Booker made a jumper in the lane and Bridges hit another 3-pointer to make it 122-114.