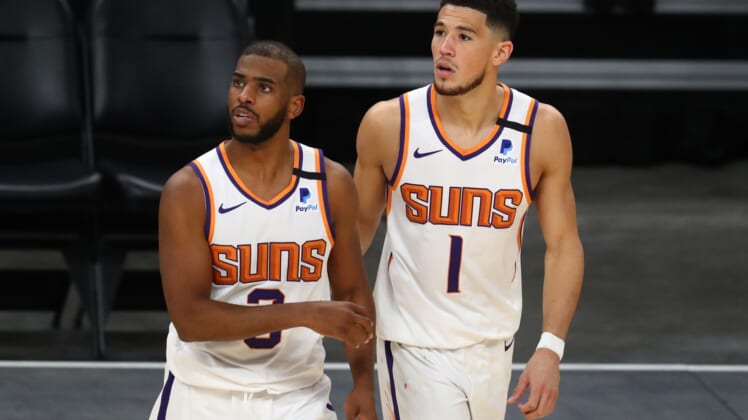 Devin Booker looks to torment Minnesota again when the Phoenix Suns host the Timberwolves on Thursday in the first of back-to-back games between the teams.

The All-Star guard is also a prime reason why Phoenix has won 18 of its last 22 games.

Booker has scored at least 20 points in 14 of his past 16 appearances to help the Suns move within 2 1/2 games of the Western Conference-leading Utah Jazz.

Teaming Booker with fellow All-Star Chris Paul has been a major success. Paul’s competitive fire has also been a key component in Phoenix’s steep rise.

“They do it within the scheme of what we do,” Suns coach Monty Williams said of the backcourt duo. “That’s the thing that gives me a level of gratification. Having two players like that that can go get their own shot, but they play that way within our system and they let their talents show within everything that we teach every day.”

The third-year pro is averaging a career-low 14.4 points but knocking down a career-best 59.9 percent of his shots.

Williams is constantly looking for progress from the 22-year-old and attempting to fine-tune his skills.

“I’m always telling him, ‘You can’t go backwards. Once you show me that you can do something, that’s what I’m going to hold you to. You set a standard and it’s on me and the staff, but expect me to hold you to that,'” Williams said.

Ayton recorded 22 points and 10 rebounds in the recent contest against the Timberwolves, who shot just 37.6 percent and 8-of-35 from 3-point range.

Minnesota arrives for the two contests — the other is on Friday — as losers of 11 of its past 13 games.

The stretch began with a season-worst nine-game slide before the Timberwolves won two of their next three. But another setback followed on Tuesday when they were outclassed 137-121 by the Los Angeles Lakers in the opener of a three-game excursion.

Karl-Anthony Towns and rookie Anthony Edwards each scored 29 points, but the defense was nowhere to be found as Los Angeles topped 30 points in each of the four quarters.

Recently hired coach Chris Finch has revamped the defensive philosophy but it hasn’t yet clicked in as Minnesota has allowed more than 130 points in four of the nine games since he was appointed.

“The way he wants us playing defense is more just kind of be your brother’s keepers,” Timberwolves guard Josh Okogie said. “Make sure we’re containing the basketball and if I’m guarding my man, I know whichever way my man goes, I have a brother to the left of me and brother to the right of me, and when the ball is passed, it’s my job to be to the right or left for my brothers.”

Edwards, the No. 1 overall pick in the 2020 draft, has flourished since the coaching change and has topped 20 points in seven of the past eight contests. He scored a career-best 34 points in Sunday’s 114-112 home win over the Portland Trail Blazers and followed up with 29 in the loss to the Lakers.

Edwards is quickly making up ground on Charlotte guard LaMelo Ball, the No. 3 overall pick, in the Rookie of the Year competition.

Apparently, Edwards (16.2 scoring average) hasn’t liked hearing that Ball was the top newcomer over the first half of the season.

“Whoever is still talking about that, they can just kick rocks,” Edwards told reporters.