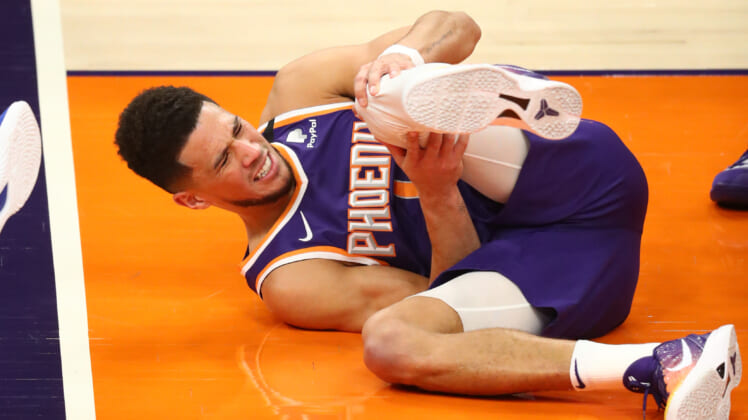 A Devin Booker injury was the last thing the Phoenix Suns needed to open the 2022 NBA Playoffs. The defending Western Conference champions are seen as the favorite to come away with the NBA title this coming June.

Unfortunately, Booker suffered a hamstring injury in the Suns’ ugly Game 2 home loss to the New Orleans Pelicans in the first round of their NBA Playoff series Tuesday evening.

Booker went down in the third quarter, leading to Phoenix falling by the score of 126-115 to a 46-loss Pelicans team.

Said injury acted as a major backdrop with Phoenix now having given up home-court advantage heading into Game 3 in New Orleans.

A report from ESPN’s Brian Windhorst on Thursday indicated that Booker could miss 2-3 weeks with a Grade 1 hamstring strain.

To say that this could have wide-ranging ramifications in the Western Conference playoffs moving forward would be an understatement.

Back in November, Booker suffered a strained hamstring and was forced to miss seven games. During last year’s NBA Finals against the Milwaukee Bucks, Booker also suffered a hamstring injury. While he played through the pain, it impacted the star’s overall performance. That’s especially true when it comes to his long-range game.

An injury of this ilk would normally keep a player out for two weeks. That’s the baseline for Booker’s absence right now. With Phoenix now mired in a first-round battle against New Orleans, there will be a rush to bring Booker back. Of course, that’s dependent on his recovery and how the first-round series looks moving forward.

With Booker sidelined for at least the next two weeks, recently-acquired point guard Aaron Holiday will likely find himelf in the rotation. He did not play in the first two games of the playoff series. We also fully expect Landry Shamet to take on larger role. The veteran two-guard shot 39% from the field during the regular season and connected on 2-of-3 shots in Game 2 after sitting out the series opener against New Orleans.

Phoenix will also be reliant on Cameron Payne and Cameron Johnson to pick up the scoring slack given the latest Devin Booker injury update. It’s not an ideal scenario.

In the short term, it now looks like Phoenix will be mired in a longer-than-expected first-round series against a Pelicans squad that went 36-46 during the regular season.

Riding the hot hand of star forward Brandon Ingram, who missed that aforementioned game to injury, New Orleans will not be an easy out in this series starting Friday evening. Ingram, 24, is averaging 27.5 points, 8.0 rebounds and 6.5 assists on 80% shooting from distance over the first two games of the series.

Looking at the Western Conference Playoffs as a whole, three of the four first-round series are tied at one. The only exception here being the Golden State Warriors, who dominated the Denver Nuggets in the first two games of their series in San Francisco.

While we fully expect Phoenix to avoid what would be the biggest upset in NBA Playoff history, a longer series could have an impact on the team moving forward. That’s especially true with a potential second-round opponent in the Dallas Mavericks set to return Luka Doncic from injury here soon.