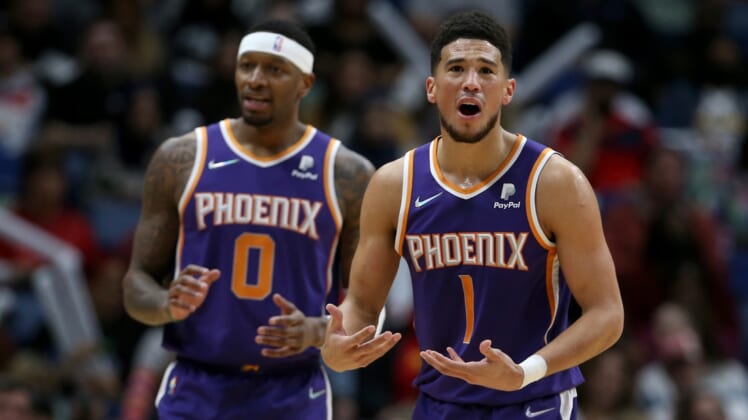 Booker made 4 of 9 3-point attempts and Mikal Bridges hit 4 of 5 while scoring 20 points for the Suns, who finished 18 of 34 from beyond the arc. Phoenix scored more than 30 points in each quarter.

JaVale McGee added 19 points, Deandre Ayton scored 18, Cameron Payne had 14 and Torrey Craig 11 as the NBA-leading Suns won for the sixth time and in eight games and took the season series from the Pelicans 3-1.

CJ McCollum returned from a two-game absence while in the NBA’s health and safety protocol to score 21 for the Pelicans. Jonas Valanciunas had 17 points and 12 rebounds, Jaxson Hayes scored 16 points, Trey Murphy III had 11 and Willy Hernangomez and Devonte’ Graham contributed 10 each.

The Suns led by eight at halftime, but Valanciunas’ tip-in completed a 13-6 run to start the third quarter that pulled New Orleans within 73-72.

Payne had five points and three assists as Phoenix rebuilt the lead to 92-81.

The Pelicans trimmed the margin to seven, but Booker converted a three-point play and made a 3-pointer to give the Suns a 98-85 lead at the end of the third quarter.

McCollum made a 3-pointer on his first shot as the Pelicans scored 23 points in the first five minutes to take a nine-point lead.

The Suns scored the next 12 points on their way to taking a 33-29 lead at the end of the first quarter.

New Orleans scored the first five points of the second quarter to briefly take the lead before Phoenix used a 13-2 run to take a 46-36 advantage.

The Suns increased the lead to 14 points, but Jones and Valanciunas scored six points each as the Pelicans got within 59-57.

Jae Crowder and Payne each sank a 3-pointer as Phoenix rebuilt the lead to 67-59 at halftime.