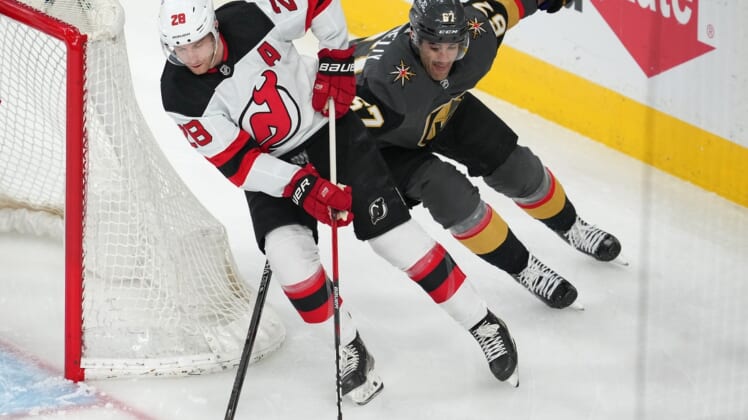 Andrew Hammond made a season-high 42 saves as the New Jersey Devils scored twice in a span of 4:43 in the third period and held on for a 3-2 victory over the slumping Vegas Golden Knights on Monday night in Las Vegas.

Hammond picked up his first win as a Devil after entering the game with a 5.95 goals-against average in his first three appearances with the team.

Nathan Bastian also scored as New Jersey survived numerous odd-man rushes by Vegas thanks to Hammond, who earned his fourth win of the season.

Keegan Kolesar scored in the second period and Chandler Stephenson scored with 1:14 left in the third for Vegas (41-31-5), which is 2-3-1 in its past six games following a 7-2-1 run. The Golden Knights remained three points behind the idle Los Angeles Kings for third place in the Pacific Division and are four points behind the Nashville Predators for the Western Conference’s second wild-card spot.

After Hammond lost his shutout bid when Kolesar’s fluky goal banked off defenseman P.K. Subban’s stick with 2:23 remaining in the second period, the Devils were opportunistic in regaining the lead.

Following an unsuccessful Vegas clearing attempt, Kevin Bahl ripped a shot from the blue line that Lehner batted down. Lehner could not handle the rebound and stopped Bastian but Johnsson crashed the left side of the crease and flipped the rebound into the net for his 13th goal at 3:14 of the third.

Boqvist then intercepted Max Pacioretty’s pass in the neutral zone and quickly sped into the offensive zone. Boqvist went around defenseman Alex Pietrangelo in the right faceoff circle and flipped the puck over Lehner while being checked by Stephenson.

After Boqvist’s ninth goal, the Devils sweated out the final minutes when Vegas pulled Lehner and got within 3-2 when Stephenson put a rebound into the open net after Hammond’s diving save on Pacioretty.

After Bastian easily swept a rebound by Lehner 6:54 into the game, the Golden Knights were unable to score on numerous breakaways before finally breaking through when New Jersey defenseman P.K. Subban’s skate deflected Kolesar’s pass over Hammond’s stick.