Detroit Tigers look to win second in row vs. Indians 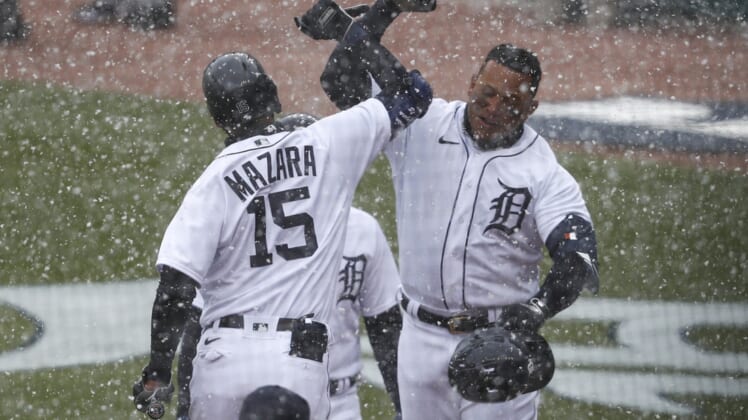 The Detroit Tigers have been rebuilding for so long, it’s easy to forget that Miguel Cabrera remains in the middle of the lineup.

Cabrera, who turns 38 later this month, served everyone a reminder on Opening Day that he still has some pop left in his bat. Cabrera clubbed a two-run homer in the Tigers’ 3-2 victory over Cleveland on Thursday.

The American League Central rivals play the second contest of the three-game series on Saturday in Detroit.

Cabrera hit an opposite-field shot off reigning American League Cy Young Award winner Shane Bieber. He’s far removed from the player who achieved the Triple Crown in 2012, but he entered this season as Detroit’s cleanup hitter.

“He still loves to play,” new Tigers manager AJ Hinch said. “Watch how he’s into it in-between plays and in-between batters. It’s just fun to watch Miggy play the game. He plays the game in its entirety.”

Injuries, particularly to Cabrera’s knees, have relegated him to designated hitter duties in recent seasons. He’s looked spry enough this spring that Hinch started him at first base on Thursday. Hinch wants Cabrera to be an “all-round player” this season, although Cabrera won’t be a full-time fielder.

“I was excited, especially to be back at first base,” Cabrera said. “It was a special day for all of us.”

Reclamation project Julio Teheran will start the second game for Detroit. Teheran appeared in 10 games with the Los Angeles Angels last season, including nine starts, and was 0-4 with a 10.05 ERA.

Teheran signed a minor league deal with Detroit in the offseason and was added to the 40-man roster at the end of spring training. He earned a spot in the Tigers’ rotation with five spring appearances.

“I like this team. I like the opportunity they gave me from the beginning,” said Teheran, who is 0-1 with a 9.64 ERA in one career appearance against Cleveland. “Obviously, I was betting on myself because I knew I was going to have a spring training like this.”

Zach Plesac will oppose Teheran. The 26-year-old right-hander has made 29 major league starts over the past two seasons, going 12-8 with a 3.32 ERA.

Plesac pitched 7 2/3 shutout innings with 11 strikeouts against Detroit last September. He allowed just one run in 10 innings in two appearances against the Tigers during his rookie season of 2019.

Plesac lasted at least six innings in all of his starts during the abbreviated 2020 campaign. He aims to do that over a 162-game season.

“This offseason was really just building a foundation of understanding we were going to have a long season,” Plesac said. “I wanted to lay the groundwork to make sure I was prepared, and my body was physically ready to take on and endure a full season.”

He had a 6.56 ERA in six spring starts but he was more concerned with working on his pitches and building stamina.