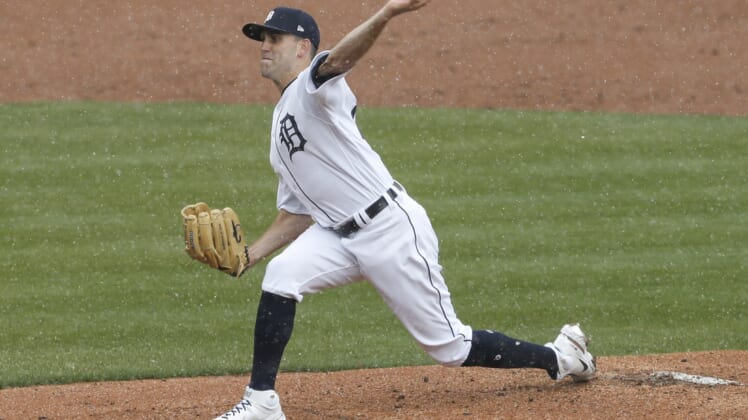 Miguel Cabrera smacked a two-run homer and the host Detroit Tigers blanked the Cleveland Indians until the ninth, holding on for a chilly 3-2 Opening Day victory on Thursday.

Matthew Boyd (1-0) started for Detroit and lasted 5 2/3 innings, allowing three hits and four walks while striking out two. Jose Cisnero pitched one scoreless inning and Daniel Norris tossed 1 1/3 innings. Gregory Soto struggled through the ninth but recorded the save.

JaCoby Jones added a run-scoring double for the Tigers.

Roberto Perez smashed a two-run homer with one out in the ninth. He brought home Amed Rosario, who had a pinch-hit infield single. Soto also walked Ben Gamel with two out but retired Cesar Hernandez on a pop out to end the game.

Detroit grabbed a 2-0 lead in the first. Jeimer Candelario singled with one out. Bieber struck out the next better but with snowflakes coming down, Cabrera clubbed an opposite-field homer. Unable to see if the ball went over the wall, Cabrera slid into second base before the second base umpire told him he could continue to circle the bases.

The Tigers added a run in the second. Victor Reyes reached on a wild pitch after a swinging strikeout. Jones then doubled to left to bring home Reyes.

Cabrera, playing first base, robbed Josh Naylor of a hit with two runners on in the fourth. Cabrera dove to his right and threw to second for a forceout. Boyd then retired Yu Chang on a foul out.

Cleveland also had two baserunners in the fifth as Boyd issued a pair of walks. He escaped that jam by getting Jose Ramirez to fly out.

The Indians had two runners on with one out in the eighth against Norris but the Tigers left-hander induced Franmil Reyes to ground into a double play.