Houston Texans quarterback Deshaun Watson cleared the first hurdle towards being traded, avoiding criminal charges following accusations of sexual misconduct. With the most important legal challenge out of the way, NFL teams are lining up for a blockbuster trade.

Watson originally demanded a trade in January 2021, no longer wanting to play for an organization he no longer trusted. However, allegations of sexual misconduct and assault kept him on the sideline for a year as he refused to play for Houston.

While the Pro Bowl quarterback is still facing 22 civil suits for sexual harassment, NFL teams are willing to look past it. Following the ruling by the grand jury, Watson won’t be facing any potential discipline from a criminal court. It’s led to an immediate acceleration of trade talks with Houston. 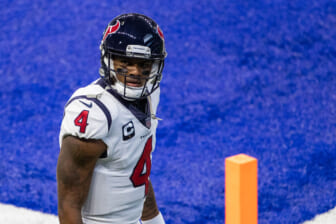 Also Read:
Deshaun Watson trade to the Carolina Panthers: How it might look

While there are still some factors that must play out before a deal happens, the biggest trade domino to fall this offseason is likely imminent.

When will Deshaun Watson be traded?

Originally, Houston set March 16 as its targeted deadline for a Deshaun Watson trade. However, there was some uncertainty about hitting that goal when many wondered if a ruling from the grand jury wouldn’t come until April 1. Fortunately for Watson and the Texans, that matter is now resolved.

The ball is now in Watson’s court. Through the contract extension signed before the 2020 season, he holds a no-trade clause that allows him to block any deal. As a result, he’s expected to hold meetings with interest clubs to find the right fit.

Watson is reportedly targeting an organization with a quality offensive line, a good defense and a head coach he trusts. Many of the teams interested in him check off those boxes.

As of now, the bare minimum to even begin negotiating with the Texans is three first-round picks and additional young talent. It will make any deal one of the biggest trades in NFL history.

Houston’s desire to start fresh and obtain more draft capital for its rebuild will likely accelerate conversations, making a deal very possible within the next week. While interested teams might want clarity from the NFL on a potential suspension for Watson, that answer likely won’t come for some time.

So, the club he lands with likely will need to prioritize having a viable backup quarterback who can start if Watson serves a multi-game suspension.

NFL teams aren’t just inquiring with Houston about Watson’s availability, they are also submitting offers. Even without clarity on a suspension, Ian Rapoport reported Sunday that both the New Orleans Saints and Carolina Panthers submitted offers for Watson.

Of course, his NTC means he gets the final say over his destination. The Saints no longer have Sean Payton to sell a quarterback on the offense, but offensive coordinator Pete Carmichael Jr. is a respected name. An offense with Watson, Alvin Kamara and Michael Thomas would be one of the best in the NFL. 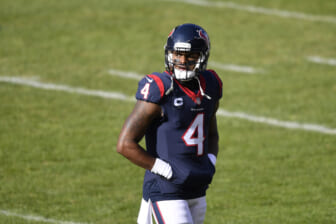 Carolina has waited for Watson to clear his legal hurdles. With owner David Tepper desperate for a franchise quarterback, it wouldn’t be a surprise if the Panthers made the strongest offer to the Texans for Watson. However, it will all come down to whether or not they can convince the young quarterback that Carolina is a good fit for him.

It’s been said that the Texans are asking for three first-round picks in return, and according to Tom Pelissero, multiple teams are willing to meet their asking price. As mentioned, it will be up to Watson where he plays in 2022.