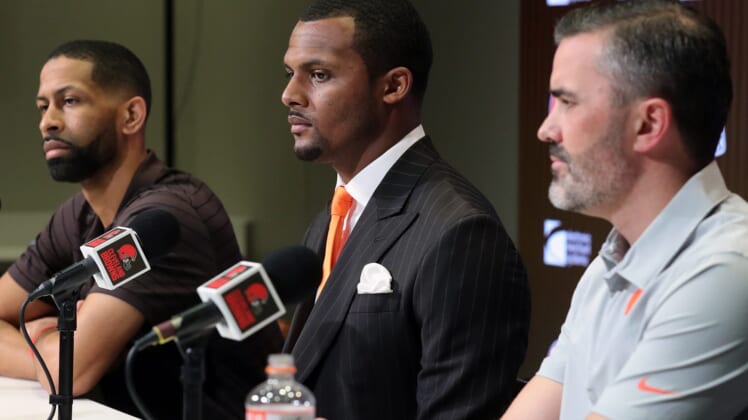 Things are now coming to a head in the Deshaun Watson situation with the NFL. Weeks after the new Cleveland Browns quarterback took part in a disciplinary hearing, we’re going to get a final judgement here soon.

According to NFL insider Josina Anderson, the arbitrator in Watson’s disciplinary case, Sue Robinson, is expected to inform the parties of her decision some time on Monday.

North of 20 women have come forward to accused Watson of sexual misconduct. While he’s not facing criminal charges, there’s a belief that the three-time Pro Bowl performer will be suspended. Recent indications are that said suspension could be between six and eight games.

The league has not backed off on pushing for Watson to be suspended for at least a year while becoming eligible to apply for reinstatement at that point. The league’s stance did not change when Watson settled 20 of his civil cases out of court.

Meanwhile, Watson’s camp points to a disconnect between a potential suspension and a lack of discipline owners such as Robert Kraft and Daniel Snyder have faced recently.

To say that Monday’s decision will have a wide-ranging impact for Watson’s Browns team would be an understatemnt.

If Watson is suspended, the Browns will rely on veteran journeyman Jacoby Brissett to be the short-term option under center. He’s not even in the same league as his younger counterpart.

Cleveland exhausted three first-round picks and change to acquire Watson from the Houston Texans this past spring. It then signed him to a fully-guaranteed five-year, $230 million contract extension. It has a ton invested in the former first-round pick out of Clemson.

In a sign that the Players’ Union might be expecting a shorter-term suspension, it released a statement Sunday evening. In said statement, the NFLPA indicated that it would not appeal the suspension.

The ending of that statement is interesting in that the NFLPA is also calling on the NFL not to appeal the ruling. Whether that happens remains to be seen. It will be all about the length of said suspension.