Cleveland Browns quarterback Deshaun Watson is now facing a 24th civil suit accusing him of sexual misconduct and inappropriate behavior during a massage. Already facing a possible suspension, the newest allegation could have another impact on Watson.

The Browns traded three first-round picks for Watson knowing he had 22 civil suits against him alleging misconduct and sexual assault. Despite the claims and the anticipation of a lengthy suspension by the NFL, Cleveland signed off on a blockbuster deal to acquire the star quarterback.

Cleveland signed Jacoby Brissett to prepare for Watson being sidelined for multiple games. When the NFL made it clear Watson wouldn’t land on the Commissioner Exempt List, it gave the Browns enough confidence to feel like Watson would be available this season.

However, the dynamic might now be changing. The latest accusation made against Watson went public on Monday, coming a week after some of his accusers spoke to HBO Sports regarding their experiences. While the NFL wouldn’t comment on the latest allegation, one top league insider raised the possibility of commissioner Roger Goodell taking a new approach. 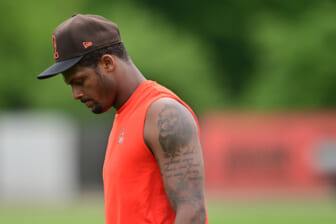 During an interview on The Rich Eisen Show, Mike Florio of Pro Football Talk explained why the Commissioner’s Exempt List could again become an option for the NFL.

The NFL uses the Commissioner’s Exempt list as a form of paid leave while it is investigating a player for violation of the league’s personal conduct policy. It wasn’t used in 2021 because Watson voluntarily agreed to sit out the 2021 season while the Houston Texans attempted to trade him.

As Florio noted, the latest allegations made against Watson could at least raise the possibility of Watson receiving paid leave this summer.

When the NFL decided Watson wouldn’t be placed on the Commissioner’s Exempt list, it came deep into the league’s investigation process after Watson already sat out the 2021 season. However, there is an important caveat now in play.

Following the latest accusation against Watson, attorney Rusty Hardin responded by saying the newest victim to come forward was not previously on their radar. This also likely suggests this is an accusation both the NFL and Browns’ officials weren’t aware of until recently.

“We are unable to respond to the new lawsuit at this time. Our legal team has not had time to investigate this new filing and had not heard her name until today. Deshaun continues to deny he did anything inappropriate with any of the plaintiffs.”

As Pro Football Talk previously reported, Watson’s $230 million guaranteed contract with the Browns contains important language. It states that the organization can’t void his guaranteed money based on an NFL suspension tied to the accusations both parties knew about when the deal was signed.

All of this means that Goodell could at least consider using the Commissioner’s Exempt list. It would prevent Watson from attending training camp, keeping Browns’ coaches and players from having to answer questions with him in attendance. It could also buy the league more time to see if more accusers come forward, speaking to any alleged victims if they want to talk to league investigators.

While it’s still possible Watson receives a lengthy suspension within the next month, the latest developments suggest a resolution is further away than anticipated.