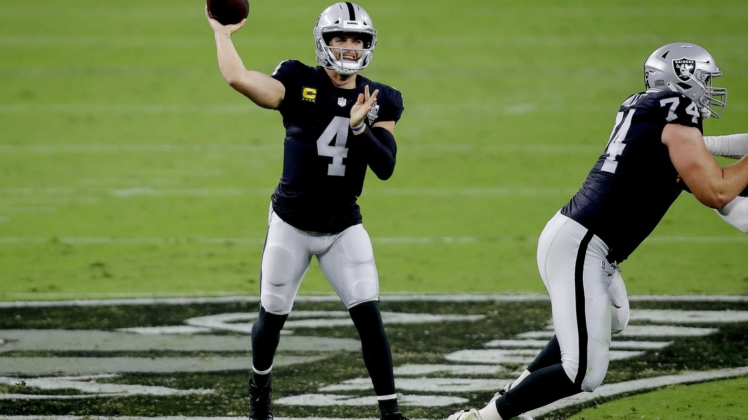 The Derek Carr Las Vegas debut shows the quarterback is done talking and is all about the doing as he excels in big Monday Night Football win over Drew Brees and the New Orleans Saints.

Before Monday, the last time we saw Las Vegas Raiders quarterback Derek Carr walk off the team’s home field, fans at the Oakland Coliseum showered him with boos after a 20-16 loss to the Jacksonville Jaguars. He left Allegiant Stadium as a winner following a 34-24 victory over the New Orleans Saints and let everyone know it. The Derek Carr Las Vegas opening was a hit and the performer was a superstar in front of a national audience on Monday Night Football.

Although fans weren’t in attendance for the Raiders first win at the “Death Star,” Carr’s name trended on social media after the victory. Some tweeted about an unwavering faith in him while others changed their skeptical tune a bit. Both sides are entitled to varying opinions on a quarterback who’s had his ups and downs through seven seasons.

Nevertheless, spectators saw one of Carr’s best games Monday. He completed 28-of-38 pass attempts for 282 yards and three touchdowns. More importantly, his decision-making kept drives alive. As a team, the Raiders converted on 12-of-19 third and fourth downs combined. The Derek Carr Las Vegas version impressed his coach.

“Outside of the stat sheet, Derek Carr was awesome tonight,” head coach Jon Gruden said after Monday’s primetime win. “He made some plays today that very few guys I’ve coached could make. I tip my hat to him he hung in there with a veteran defense.”

After a rocky opening quarter in which the Raiders scored zero points, Carr started to heat up. He pinpointed throws to fullback Alec Ingold and wideout Zay Jones for touchdowns during the second frame. By halftime, Vegas tied New Orleans at 17.

Carr continued to spread the ball like a Las Vegas Strip blackjack dealer, passing aces to a different player every time he looked up.

Derek Carr and Darren Waller were the talks of the town on Monday, connecting often and when it mattered the most. Waller finished with 12 catches for 103 yards and one touchdown. Carr and Waller had that otherworldly sync.

Ironically, the Raiders didn’t even have a full deck with wide receiver Henry Ruggs III hampered by a knee injury. Yet, Carr found a way to use him.

According to Pro Football Focus’ Nathan Jahnke, Ruggs played 49 offensive snaps. Through the contest, Carr targeted him four times, and he hauled in one catch for four yards. However, the rookie wideout’s speed put enough fear in safety Janoris Jenkins to draw a flag for defensive pass interference, which put the Raiders in Saints territory and eventually led to Daniel Carlson’s 54-yard field goal.

Last week, Ruggs only participated in a non-padded practice and listed questionable for the game. Still, his speed alone helped open up spots across the field for his teammates and forced Jenkins’ crucial error down the stretch.

Carr completed a pass to 11 different pass-catchers, which is what you’d like to see with all the depth at the offensive positions.

Other than Darren Waller, the Saints couldn’t key in on a specific player with Jones, Ingold, Nelson Agholor and Foster Moreau all involved in the passing game. Rookie third-rounder Bryan Edwards had two big-play receptions for 20 and 22 yards.

The connection between Carr and Waller seemed unstoppable when they locked eyes on a play. The Raiders’ star tight end converted 16 targets into 12 receptions for 103 and a touchdown.

“Yeah, I think you know how much I love him,” Carr said of Waller after Monday’s victory. “He did an exceptional job. I hope everyone gets to see everything about Darren Waller that we know him to be.”

Unlike the past, the Raiders offense didn’t lose much steam in the second half. For the most part, Gruden kept his foot on the gas pedal, trusting Carr in a 4th-and-goal scenario at the Saints’ 1-yard line. He went to Waller on a rollout to the right for a touchdown.

Much like the 2016 season opener, the Raiders made a statement against the Saints. Gruden’s aggressive decision-making paralleled former head coach Jack Del Rio’s approach four years ago. Remember his call to go for the two-point conversion and the win at the Mercedes-Benz Superdome?

Gruden had a similar moment when he decided to go for six instead of three with the game tied at 17 in the third quarter. Don’t forget the decision to trust Carlson’s leg from 54 yards out with a chance that Brees could’ve driven down a short field for a tie.

We saw early signs of trust between Gruden and his offense as well as the special teams unit. Carr and Carlson rewarded him with 10 crucial points.

Carr started a bright new chapter at Allegiant Stadium. Gruden notched a signature win against a playoff-caliber team (even without wideout Michael Thomas).

“I’ll let everyone else talk about the statement,” Carr said of the win being a statement about his team. “I’m tired of talking and I think people can hear it in my voice sometimes. It’s nice. It’s nice to go out and be 2-0. It’s nice to play against the Saints and get a win. It feels good. But like I told the guys after the game, the job is not done. Going on to the Patriots next week, we can lose. Coach Belichick has a day up one me already and I got to get to studying.”

If we’re going to see more of Carr’s hot blackjack hand and Gruden’s gambling ways, the Raiders have certainly come to the right place in Vegas. They went home with the jackpot Monday night.