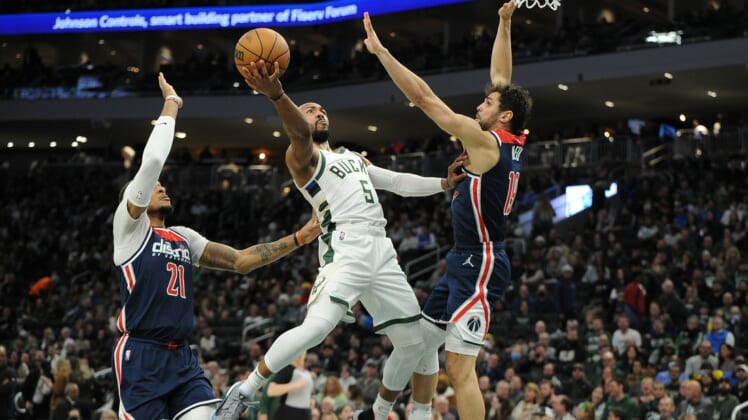 Jrue Holiday eclipsed the 20-point mark for the fourth time in five games as the Milwaukee Bucks defeated the visiting Washington Wizards 114-102 on Thursday night, handing them their eighth consecutive road loss.

With Giannis Antetokounmpo and Khris Middleton sidelined, Holiday finished with 24 points and 10 assists to lead the Bucks to their second victory in the three-game season series against their Eastern Conference foe.

Grayson Allen contributed 21 points on 7-of-10 shooting, including five 3-pointers. Pat Connaughton notched 16 points off the bench, and Bobby Portis had 11 points and 12 rebounds to record his first double-double since March 9.

The Bucks extended their lead to 26 by the end of the third quarter after putting together a 16-6 run over the final 3:33. Washington mounted a comeback to get back within seven, but that was the closest they got.

Ten 3-pointers helped send Milwaukee into halftime with a commanding 60-42 lead. Holiday led all scorers with 17 points, and Connaughton added 10.

Washington had trailed by 26 but closed the half on a 10-3 run. Caldwell-Pope paced the Wizards with 12 points, nine of which came in the second quarter. Neto nabbed seven, and Porzingis went for six.

Offense came at a premium for Washington, especially from 3-point range, as it cashed in on just 4 of 17 attempts from deep (23.5 percent) before the break.

Holiday scored 10 points and the Bucks shot 56.5 percent through the first 12 minutes to jump out to an early 19-point lead. The Wizards had no answer, as they went just 1-for-9 from beyond the arc and shot 28.6 percent in the quarter.