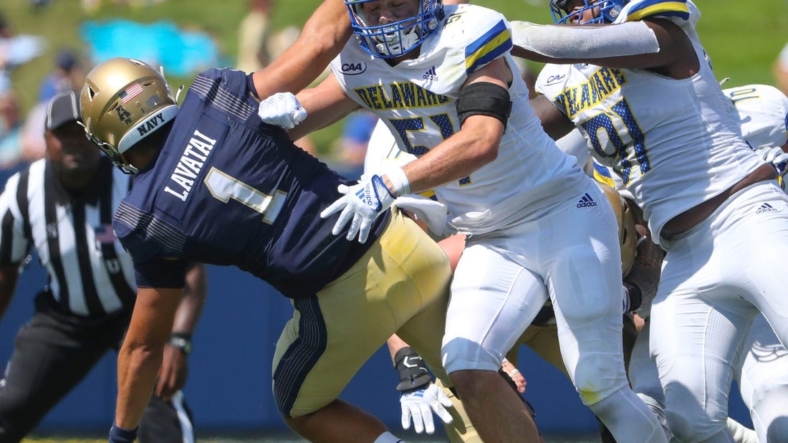 Navy’s season got off to the most discouraging start possible: a lost fumble on the first play from scrimmage and a home defeat at the hands of Delaware, an FCS team.

The Midshipmen try to turn things around in a hurry when they host Memphis in the American Athletic Conference opener for both teams on Saturday in Annapolis, Md.

Navy (0-1, 0-0 AAC) outperformed Delaware in several categories. The Blue Hens were held to 202 yards total offense and outgained by Navy 184-13 in rushing yards. But the Midshipmen couldn’t translate those advantages into points, lost three fumbles and went 0-for-3 on fourth downs in the 14-7 defeat.

Quarterback Tai Lavatai accounted for two of the lost fumbles, putting the ball on the ground three times in all. Lavatai went 5-for-13 for 135 yards and gained only 34 yards on 18 carries, running in Navy’s only touchdown.

“We’ve got to make sure we don’t have those mesh fumbles anymore,” coach Ken Niumatalolo said, mentioning Lavatai by name. “It’s hard enough to take care of the rock but when you have those self-inflicted type of turnovers, I mean, those were all mesh fumbles.”

Memphis (0-1, 0-0 AAC) opened its season at Mississippi State and fell behind 28-3 at halftime on its way to a 49-23 loss. Bulldogs quarterback Will Rogers torched the Tigers for 450 passing yards and five touchdowns.

The Tigers’ defense now must do a 180 from coping with Mike Leach’s Air Raid offense to defending a service academy triple option.

“I told our guys, ‘Hey, that’s in the rearview. Flush it, let’s go.’ … because it is a completely different scheme,” Silverfield said. “To really narrow in and hone in on a different offensive attack, it will be good for our defense. A different challenge, for sure.”

Seth Henigan guided the Memphis offense with 19-of-30 passing for 165 yards and a touchdown against Mississippi State.

Memphis holds a 4-3 edge in the all-time series against Navy, including victories in each of the past three seasons. In last year’s 35-17 win, Henigan threw for 215 yards on just 8-of-12 passing thanks in part to a 74-yard touchdown play.