The Broncos’ status as a top-end contender for Payton’s services comes after they received permission from New Orleans to interview him. He’s still under contract with the Saints and will cost draft pick compensation if brought to Mile High.

While Payton would no doubt be a home run hire, there’s a lot that goes into the process of hiring him. That includes the cost of at least a first-round pick.

Ryans is a different monster. He’s seen as the hottest head coach candidate after leading the NFL’s top defense during the regular season. What he’s done since replacing Robert Saleh as the 49ers’ defensive coordinator in 2021 can’t go unnoticed. Here’s why Ryans actually makes more sense than Payton for Denver Broncos.

DeMeco Ryans would provide the Denver Broncos some youth

Payton, 59, is in no way over the hill. He also can’t be seen as a retread head coach hire. After all, we’re talking about one of the most-successful head coaches in modern NFL history.

Rather, this is all about what Ryans brings to the table. He’s an emotional leader on the sideline and a player-friendly head coach. Current 49ers players have not had anything bad to say about the former Pro Bowl linebacker.

Rarely have we seen someone ascend the rankings of NFL coaches the way Ryans has. His first year as an assistant in any role was back in 2017 as the 49ers’ defensive quality control man under Kyle Shanahan. After three seasons coaching inside linebackers, he was promoted to defensive coordinator. The rest is history. 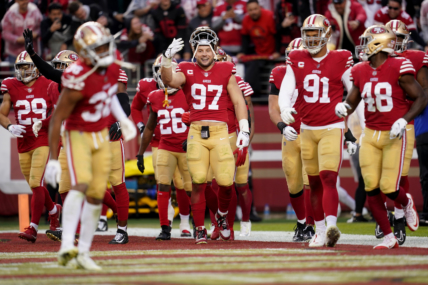 There’s a reason multiple 49ers assistants have received head-coaching jobs recently. In fact, Saleh and Mike McDaniel were promoted to that role with other teams in consecutive offseasons. Ryans will likely make that a trifecta.

He will also bring quality assistants with him to Denver should the Broncos make this hire. Current 49ers passing-game coordinator Bobby Slowik would certainly make sense at offensive coordinator. He has 10 years of experience in the NFL and has seen things from the lens of both offense and defense throughout his career.

The cost of acquiring Sean Payton

Payton announced recently that it would likely cost an acquiring team at least a first-round pick to pry him away from his Saints contract. Denver is not in the greatest of situations after sending multiple first-round picks and other draft capital to the Seattle Seahawks for Russell Wilson last offseason.

The Broncos are currently slated to pick 28th overall with the selection it acquired from the Miami Dolphins in the Bradley Chubb in-season trade (via San Francisco). Coming off a 5-12 season in which they finished in last place in the AFC West, it’s an open question whether the Broncos should deal said selection. There’s a talent vacuum that needs to be filled in Mile High.

While Payton would be a tremendous hire, the cost of bringing in DeMeco Ryans would be significantly less.

As it is, the Broncos’ search contingent of new co-owners Greg Penner and Condoleezza Rice as well as general manager George Paton have a huge decision on their hands.