Mike LaFleur followed Robert Saleh from the San Francisco 49ers to the New York Jets ahead of the 2021 season in hopes of turning around a fledgling offense.

As part of the Kyle Shanahan coaching tree, expectations were initially high in Jersey. Now, after less than two full calendar years, LaFleur finds himself out of a job.

NFL Media’s Ian Rapoport was the first to report on Wednesday that LaFleur and the Jets have mutually agreed to part ways.

There’s a lot of different layers to this decision. First off, New York’s offense was a hot mess as the 2022 season came to a conclusion. It scored all of 15 points without a single touchdown over the course of the final three regular-season games, pretty much eliminating any hope that New York could earn a surprise playoff appearance.

But it’s not like Mike LaFleur had a lot to work with. Second-year quarterback Zach Wilson proved to be in over his head as QB1. He was benched multiple times throughout the season due to both his on-field performance and a perceived lack of maturity.

Four different quarterbacks in that of Wilson, Joe Flacco, Mike White and Chris Streveler started games for the Jets in 2022.

LaFleur shares in a lot of the blame when it comes to New York’s struggles over the past two seasons. His offenses ranked 26th in yards and 28th in points scored back in 2021. This past season saw the unit rank 25th and 29th, respectively. That’s not progress.

CBS Sports NFL insider Josina Anderson notes that LaFleur and the Jets mutually agreed to part ways after multiple teams inquired about his availability. New York opted to let him pursue those opportunities. 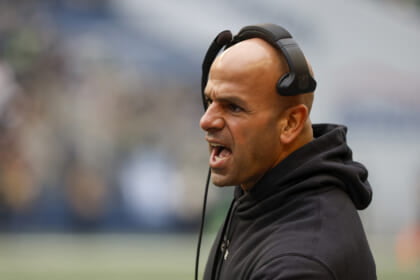 Prior to joining Saleh with the Jets, LaFleur began his NFL coaching career as a Cleveland Browns intern in 2014. He then served as an offensive assistant with the Atlanta Falcons in 2015 and 2016 before acting as the 49ers’ passing-game coordinator from 2017-20. All of these stops had one thing in common: Kyle Shanahan.

As for the Jets, they are now back to the drawing board. There was some thought that Saleh himself could be on the hot seat after New York ended the 2022 season on a six-game losing streak. At least right now, it seems he’s earned another year as the Jets’ head coach.