Defending champ Stanford back in Final Four with win over Texas 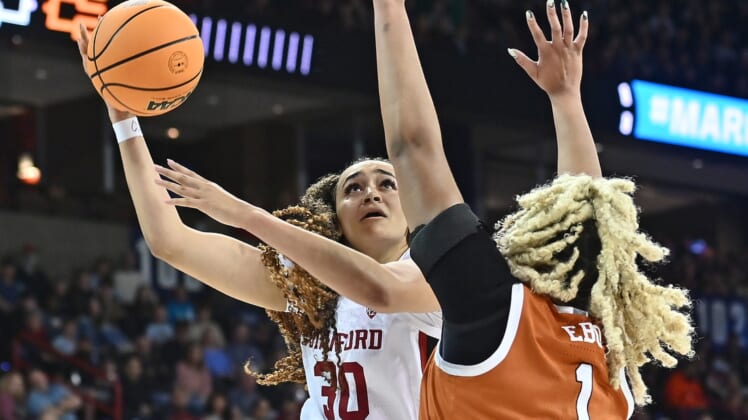 Lexie Hull and Haley Jones combined for 38 points and No. 1 Stanford reached the Final Four with a 59-50 victory against second seed Texas in Spokane, Wash., on Sunday.

The Cardinal (32-3), winners of 24 straight games, will continue the defense of their 2021 NCAA title Friday in the national semifinal against either North Carolina State or UConn.

Texas (29-7) was in the Elite Eight for the second straight season but have not played in the Final Four since 2003. The Longhorns had a 14-game winning streak end.

Hull had 20 points, Jones 18 points and 12 rebounds and Cameron Brink scored all 10 of her points in the second half for the Cardinal.

The game was a rematch from Nov. 14, when the Longhorns went to Stanford and earned a 61-56 win in the second game of the season for both teams.

The Cardinal took a 45-40 lead into the fourth quarter and extended the margin to 50-43 before Texas reeled off five straight points.

Stanford responded with Hull making an old-fashioned three-point play. Aaliyah Moore made a jumper for Texas but Hull made another foul shot for a 54-50 score and Jones added a pair from the line with 1:02 left. The lead grew to 58-50 on two free more free throws for Jones with 41 seconds left.

The score was tied 14-14 after the first quarter thanks to a buzzer-beater by Jones to end a field-goal drought of 4:48 for Stanford.

Stanford found its shooting touch late for the 30-27 halftime lead, hitting six of their final eight shots. Hull led the Cardinal, who were 1 of 8 from 3-point range, with 12 points.