The Atlanta Hawks are one of, if not the most disappointing team of the 2021-22 NBA season. They’ve followed up an appearance in the Eastern Conference Finals by being 17-20 and the 12th seed in the conference. As a result, the Hawks could be busy at the NBA trade deadline. Danilo Gallinari is a candidate to be moved.

Hawks general manager Travis Schlenk recently left the door open for making a trade, and The Athletic’s Sam Amick reports that Gallinari and Cam Reddish are the most likely players to be dealt. While in the midst of a down year, Gallinari is a proven shooter and scorer who has made a difference on playoff teams throughout his NBA career.

Well, the Kings haven’t traded their core yet, so that doesn’t shut the door on them being buyers. Gallinari would be a frontcourt enhancement for head coach Alvin Gentry’s rotation.

Sure, Gallinari and Harrison Barnes have some similarities in their respective games in that they’re reputable shooters who can put the ball on the floor. That said, this is an inconsistent Kings team and one near the bottom of the Western Conference; Gallinari aids them in both regards.

He adds another forward who can score on his own, as well as someone who can capitalize on the attention that De’Aaron Fox and to a degree Tyrese Haliburton attract on the offensive end. Gallinari improves an overall subpar shooting team.

Bagley’s time with the Kings is nearing an end, and Harkless isn’t a long-term piece to the puzzle. They move the pair of players for a midseason boost and someone whose then-expiring contract could be moved in the offseason if the Kings choose to blow it up.

All that said, the Kings may prefer to buy at a lower level than acquiring Gallinari.

While Luka Doncic being on and off the floor isn’t helping, the Mavericks are supposed to be better than 20-18. Trading for Gallinari helps them climb up what has been a lacking Western Conference this season while beefing up their playoff rotation.

Gallinari could take on one of two roles in head coach Jason Kidd’s offense: 1) he starts at power forward, presumably in-between a healthy Doncic and Kristaps Porzingis or 2) be instant offense off the bench. Gallinari can thrive in either role. In scenario one, he gets clean looks from the perimeter given the focus that teams put on Doncic and Porzingis. As for scenario two, Gallinari would be part of a highly productive second unit.

In all likelihood, the Mavericks are going to make a move before the trade deadline, as they should. They’re a contender in the West and should act as such in their transactions. Dallas gets more productivity and another player who can score late in the shot clock in Gallinari.

Dallas has a great deal of frontcourt depth, allowing them to trade Kleber and Powell. From Atlanta’s perspective, Kleber gives them an outside shooter to come off the bench and they can reroute Powell.

What could stop the Mavericks from landing Gallinari, though, is them preferring to make a trade in the backcourt, rather than for a versatile frontcourt player.

Working under the mindset that the Trail Blazers are riding out the season with Damian Lillard and CJ McCollum in their starting backcourt, a move for Gallinari makes sense.

New head coach Chauncey Billups has an underachieving roster; the Trail Blazers are better than the 12th seed in the West. It’s feasible to think this team will play better given the amount of proven and in some cases top-tier scorers present. Gallinari adds to their scoring arsenal. 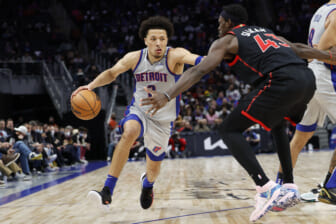 The 33-year-old gives the Trail Blazers a steady and capable frontcourt scorer, which is something they don’t have at the moment. In this trade, Portland gets smaller, specifically by moving on from Nurkic. By trading Nurkic and Covington for Gallinari, they ensure having a frontcourt starter on their roster for next season while adding a future second-rounder (Nurkic and Covington are free agents after this season).

A five-man unit at the end of games of Lillard, McCollum, Norman Powell, Nassir Little/Larry Nance Jr. and Gallinari is one with an amplitude of scoring. Portland’s best chance at success this season is stockpiling offensive talent. If they come up short and then embrace a rebuild, they should be able to move Gallinari. As for Atlanta, Covington replaces Gallinari and Nurkic could be moved upon arrival for a package that better suits their operation.

Trading for Gallinari improves the Trail Blazers and doesn’t impede any direction they may go in the future.