Despite no Trae Young, Hawks win in Sacramento 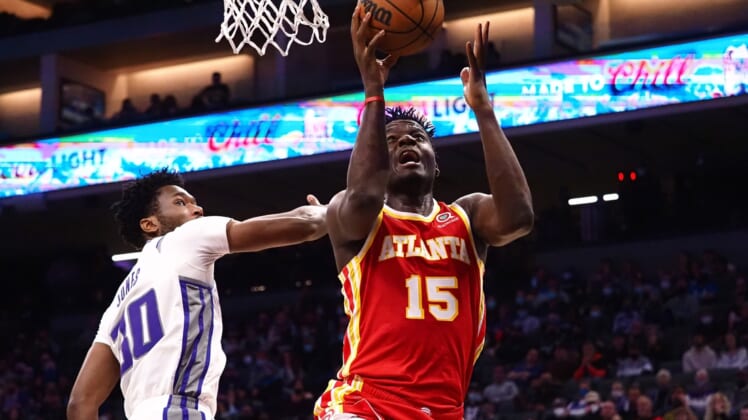 Kevin Huerter scored the go-ahead layup and contributed 25 points and a season-best 11 rebounds off the bench to lead the Atlanta Hawks to a 108-102 victory over the host Sacramento Kings on Wednesday night.

Huerter scored 11 fourth-quarter points on a night in which the Hawks played without star Trae Young (back), who scored a career-best 56 points during a 136-131 loss to the Portland Trail Blazers on Monday.

Cam Reddish scored 18 points, Danilo Gallinari tallied 16 and Delon Wright added 15 for Atlanta, which won for just the fifth time in the past 15 games.

Timothe Luwawu-Cabarrot scored 14 points and Clint Capela added 11 points and 14 rebounds as the Hawks ended a string of five straight losses in Sacramento.

De’Aaron Fox scored 30 points and Tyrese Haliburton added 24 for the Kings, who lost for the 10th time in their past 15 games. Buddy Hield had 11 points off the bench.

Huerter banked in a tiebreaking driving layup with 37.7 seconds remaining to give Atlanta a 103-101 lead. He added two free throws with 21.6 seconds left and split a pair with 12.6 seconds to go as the Hawks closed it out.

Atlanta was also without John Collins, Bogdan Bogdanovic and coach Nate McMillian. All three are in the COVID-19 protocol.

Atlanta connected on 45.3 percent of its field-goal attempts and was 8 of 30 from 3-point range.

The Kings shot 42.2 percent from the field, including 11 of 27 from behind the arc. Haliburton was 5 of 7 from long range.

Haliburton buried a 3-pointer to tie the score at 98 with 1:17 remaining.

Reddish drained a 3-pointer to put the Hawks back ahead with 1:01 to play but Fox knotted the score with a three-point play with 54.3 seconds left before Huerter took over.

Even without Young, Atlanta held a 54-45 lead at the break.

The Kings caught Atlanta at 61 when Marvin Bagley III made a basket with 7:28 left in the third quarter. The score was tied again at 71 on Haliburton’s 3-pointer with 2:14 remaining before the Hawks took a 78-75 lead into the final stanza.