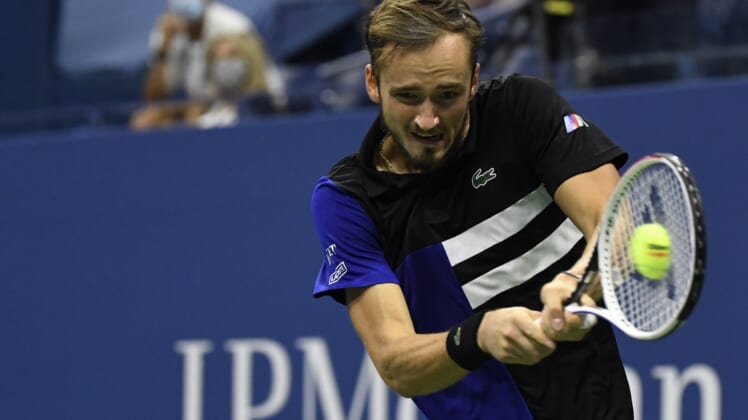 Daniil Medvedev pushed his winning streak to 20 on Friday to cruise into the Australian Open final against Novak Djokovic.

Medvedev marched past fifth-seeded Greek Stefanos Tsitsipas and the No. 4 seed in Melbourne set up a Sunday showdown with Djokovic.

Medvedev, whose 20-match streak includes 12 wins against top-10 foes, taunted the partial crowd that was fully and vocally in support of Tsitsipas from the start.

But the 6-foot-6 Medvedev was never truly threatened on Friday. Tsitsipas first broke the Russian in the third set.

“During today’s match I saw that as soon as I was moving him around the court it was not easy for him,” Medvedev said in an on-court interview post-match. “As soon as I saw it in the first set that became my go-to straightaway.”

The 6-4, 6-2, 7-5 win gives Medvedev a shot at his first Grand Slam title. He already has the confidence of having downed Djokovic in November, 6-3, 6-3 at the Nitto ATP Finals. Medvedev has won three of his past four matches against Djokovic, who leads the all-time head-to-head series 4-3.

“I just hope that I am going to go out there, show my best tennis,” Medvedev said of Sunday’s match with Djokovic. “As we see, I can win some big names if I play good.”

Djokovic has never lost in the Australian Open final. This is his ninth appearance, and he has eight Aussie Open men’s singles titles.

In his only other Slam final, Medvedev went five sets but lost to Rafael Nadal at the 2019 US Open.

While Tsitsipas exited Melbourne with an estimation of the 25-year-old Medvedev being very capable of winning on Sunday, Djokovic, too saw the Russian closing on this moment. Earlier this week he called him the player to beat.

“Medvedev is playing an extremely high (level),” Djokovic said this week. “He’s on a winning match streak, over 20 matches won. He’s just the man to beat, you know.”