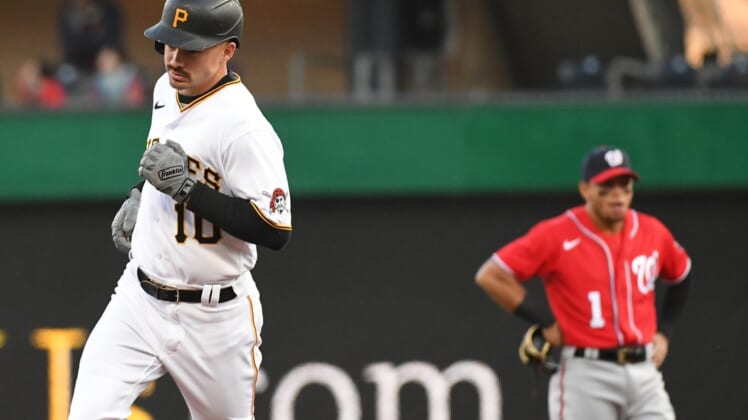 Daniel Vogelbach went 4-for-6 with a home run and two RBIs as the Pittsburgh Pirates opened a four-game series against the visiting Washington Nationals with a 9-4 victory on Thursday.

Bryan Reynolds added a two-run homer for Pittsburgh, which battled back from an early 3-0 deficit. Cole Tucker had three of the Pirates’ 14 hits and Kevin Newman hit a two-run double.

Washington sent eight batters to the plate in the top of the first inning and scored three runs against Pittsburgh starter JT Brubaker.

The Nationals loaded the bases with one out on three walks before Keibert Ruiz singled in a run and Yadiel Hernandez followed with a two-run hit. Hernandez had three hits in the loss.

Pittsburgh answered with Vogelbach’s leadoff homer in the bottom of the first off Joan Adon (0-2), who was making his third career start.

The Pirates pulled ahead 5-3 with four runs on six hits in the third inning. Reynolds belted a two-run homer and Newman doubled in two.

Reynolds, who prior to the game signed a two-year, $13.5 million contract with the Pirates to avoid arbitration, had two hits and two walks.

Adon allowed six runs on nine hits over 4 2/3 innings. He walked three and struck out five while throwing 91 pitches.

Washington loaded the bases with one out in the fifth but was limited to just one run on Maikel Franco’s sacrifice fly.

Brubaker gave up four runs on five hits and four walks over 4 1/3 innings. He fanned five.

Pittsburgh extended its lead to 6-4 in the bottom of the fifth on Roberto Perez’s two-out RBI single off Hunter Harvey.

The Pirates added another run in the sixth and provided some cushion with two more in the seventh, when Vogelbach singled in a run and Ben Gamel walked with the bases loaded to stretch the lead to 9-4.

Vogelbach recorded his second career four-hit game and came within a triple of hitting for the cycle.