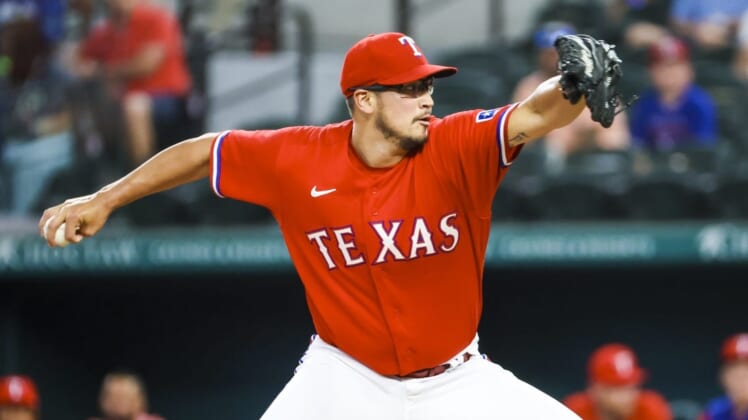 It makes sense, but it’s still a startling statistic.

If Texas Rangers starting pitcher Dane Dunning gives up four runs or more in a start this season, he loses. Unfortunately, when he holds the opponent down, he hasn’t been rewarded so far.

Dunning (1-5, 4.17 ERA) will take the mound for the Rangers on Wednesday afternoon as they conclude a three-game series in Kansas City. The Royals will send Zack Greinke (1-4, 4.68) to the mound.

The Rangers took their second straight game in the series, 8-3 on Tuesday, handing the Royals their fourth straight loss. Texas’ Marcus Semien had three hits, four RBIs and three runs, and Jon Gray allowed one run on five hits in seven innings.

Dunning has given up at least four runs four times in 2022, and he’s lost all four games. The Rangers scored a total of seven runs in those games. The most runs Dunning has allowed is five (three times).

The other loss came in a game in which he gave up three runs and the Rangers lost 4-2 to the Seattle Mariners.

“I haven’t thought about that, even once,” Dunning said Tuesday. “I go into each start with my game plan to attack hitters and that’s about it. I try to give our team the best opportunity to win.”

Dunning has given up two or fewer runs and pitched at least five innings, on seven different occasions, but he’s only earned the victory in just one of those contests. Certainly that has to be frustrating?

“Not really,” he said. “In those starts, I feel like I gave my team a chance to win. After each start I try to forget the past and focus on what I have ahead of me.”

Dunning defeated the Royals on June 25, 2021, when he allowed two runs on five hits in five innings. He also had two no-decisions vs. Kansas City in 2020 as a member of the Chicago White Sox.

His counterpart on the mound Wednesday has a much longer track record, but Greinke also had trouble earning a win early this season, even when pitching well. He took the loss in two different games in which he allowed one run.

Greinke went on the injured list after a forearm strain, which was evidenced by a four-game stretch in which he allowed 19 runs in 18 innings. He was activated on Friday after a four-week absence, and he allowed one run on three hits in six innings against the Oakland Athletics en route to a 3-1 win that night.

“He looked great,” Kansas City manager Mike Matheny said. “But he’s looked great in so many outings this year when he didn’t get the results. It was good to see the results match the execution.

“He was fighting a little bit (before going on the IL), but that happens to every pitcher. You’re just going to have those days when you’re not feeling your best and you still have to compete. Zack’s going to compete.

“Given that chance to recalibrate, work on a couple of things, get healthy and feel better, his odds of executing are going to go significantly higher.”

Greinke is 7-8 with a 3.72 ERA in 23 career appearances against the Rangers, including 21 starts.