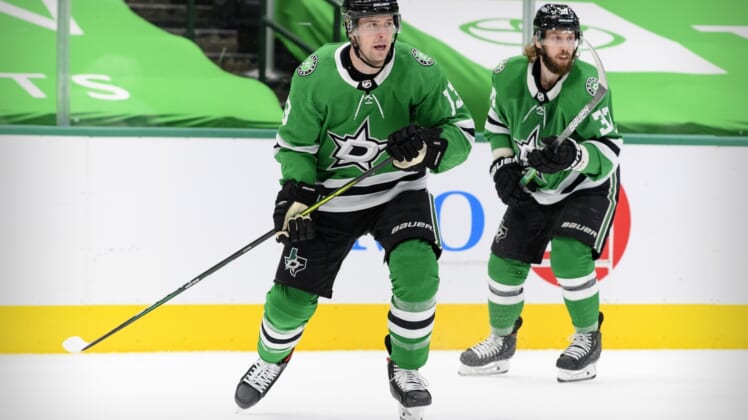 The math is simple and too obvious to overlook. The Dallas Stars sit seven points outside of a playoff position — trailing both the Nashville Predators and Chicago Blackhawks, who are tied for the fourth spot in the Central Division.

That deficit, as the Stars prepare to face the Predators on Thursday night in Nashville, would be significantly less if they were even a 50/50 team in extra-time games. Tuesday’s 3-2 overtime loss to the Predators left Dallas with a miserable 2-10 record in overtime or shootout games.

“It’s hard,” Dallas defenseman Mark Pysyk said. “We’ve been in a lot of overtime games that haven’t gone our way. We’re happy with the point, but we obviously wanted two.”

At this point, the Stars — who have just one win in their past six games — can’t just want two-point wins when games go beyond 60 minutes. They need two points in those clashes. Dallas has lost three extra-time games to the Predators and two to the Blackhawks this season.

The frustration for Dallas is heightened after Tuesday’s loss. The Stars were the better team for most of the game, had a 2-1 lead going into the third period but surrendered that early in the frame.

“It’s all about maintaining puck possession, and when you don’t have it, you can’t score,” said Stars rookie forward Jason Robertson, whose scoring run has put him in the Calder Trophy conversation. “You’ve just got to keep looking forward to getting the puck, trying to strip it off of them.”

The numbers for Nashville of late are much more attractive. The Predators are riding a six-game winning streak and have won eight of their past nine games.

Just a few weeks ago, the Predators were expected to begin selling off assets and start rebuilding. Instead, they’re in the middle of a playoff-berth battle, even with a handful of key players sidelined due to injury.

“If you really go back to the start of the long road trip that we had, we did have a couple of meetings and talked about, ‘Why are we not committed to playing a certain way with our forecheck, our reloads, the play without the puck, the intensity level you need to play with?'” Nashville coach John Hynes said.

“And it was a commitment on that road trip to go through, and because of that commitment, we had success. Then, from success comes more buy-in and more commitment to doing what you need to do and how we need to win as a team. Every team has an identity, and it took us a little bit longer than maybe we would have liked to get to the identity that we want, but now we have it.”

Amid their turnaround, the Predators have seen the emergence of rookie forward Eeli Tolvanen. The overtime hero on Tuesday is riding a six-game points streak in which he’s collected three goals — two of them game-winners — and six assists. Nashville’s record for longest point streak by a rookie is seven games, set by Filip Forsberg.

“I think personally when the team is playing well, it’s easy to chip in,” said Tolvanen, a 2017 first-round draft choice. “I think we’re just working hard as a line (with Viktor Arvidsson and center Ryan Johansen) and as a team right now. I think the forward group is doing a really good job, and I think that’s one big reason we’re going to get scoring chances. And for me, the power play is working right now really well.”