The Dallas Cowboys had to make some difficult decisions this offseason. Among them was parting ways with star wide receiver Amari Cooper, which left a notable hole on the roster despite still having CeeDee Lamb and Michael Gallup. The Randy Gregory fiasco also didn’t end up going well for the team and owner Jerry Jones, as the Cowboys were on the receiving end of some harsh words from the defensive end.

All of that drama aside, there are still concerns with the roster. If the team wants to return to the playoffs, they’ll need luck during the NFL Draft. In particular, they need some talent to fall their way to make the most of the player selection meeting.

One thing already going their way is that they’ll have multiple Day 3 picks and a total of four in the fifth round.

Due to the financial constraints that the Cowboys found themselves in during this offseason, the team’s draft strategy will likely be different from last year. They’ll need to find starters from Day 1 through Day 2, while then using the fifth round to replenish their roster.

Three positions that need to be addressed with the utmost urgency are defensive line, linebacker, and wide receiver. Several mock drafts throughout the offseason have had Dallas going with an offensive tackle early, but it’s plausible that, thanks to the depth of the position in this year’s class, the Cowboys could walk away with a tackle prospect or two in this year’s draft.

The Cowboys’ defensive line would benefit from a physical freak that boasts versatility, size, and quickness. Look no further than to Georgia’s Devonte Wyatt, one of the prized prospects from the college national champion’s defensive line. At 6-foot-3, 307 pounds, Wyatt made the most of his NFL Combine outing running a 4.77 during his 40-yard dash. In addition, Wyatt had a 111-inch broad jump and a 29-inch vertical jump.

Dan Quinn’s defense needs more pressure from the interior, and Wyatt would provide just that. He would flourish as a 3-tech in the NFL as he consistently dominates from the point of attack, penetrating the opposing offensive line with ease. That is facilitated by an impressive spin move and a notable first step combined with remarkable tackling.

Wyatt has the potential to be a game-changing defensive lineman who has solid awareness and a good feel for the game. His movement is amazing for someone his size, as his lateral speed and change of direction allow him to be a menace all up and down the line. You throw in Wyatt’s motor and relentless play, and the Cowboys would have themselves a playmaker.

To help solidify their linebacker group, the Cowboys would be doing themselves a great service by picking up one of the most versatile players in this draft, Montana State’s Troy Andersen.

The 6-foot-3, 243-pound defender is one of the most underrated prospects this year. In fact, Anderson played not only linebacker but also running back and quarterback, displaying great football IQ and athletic ability. As far as the NFL Combine, Andersen showcased his speed as he posted a 4.41 time in his 40-yard dash. That’s notable considering his size, as he also put on a clinic during his combine drills, putting his movement skills on display.

To put it into simple terms, Andersen is an athlete. He boasts solid coverage abilities combined with superb tackling, all prerequisites for being an NFL linebacker. Andersen regularly showed off his talents in college, most notably his sideline-to-sideline speed that allowed him to be a playmaker. Despite being labeled as “raw,” Andersen’s physical gifts and athletic potential make him a prospect with significant upside.

Considering how deep the wide receiver class is this year, the Cowboys need to walk away with at least one prospect from it. In the third round, Jones can draft UCLA star Kyle Philips, a 5-foot-11, 186-pound polished route runner with some of the best hands in the group.

Though Philips lacks prototypical size, so did another well-known NFL wideout by the name of Wes Welker. Philips could become a reliable slot receiver, though the Cowboys could bring him along slowly on third downs only.

Possessing arms that measure nearly 30 inches with a 72-inch span, Philips makes the most of this in his route running. Philips lacks game-breaking speed, but his length and ability to create enough separation make him a viable option either over the middle or down the sideline. What he doesn’t have in speed, Philips will make up for in notable footwork and elusiveness. Philips will also be an asset in run blocking and pass protection as he isn’t afraid of putting in the dirty work. 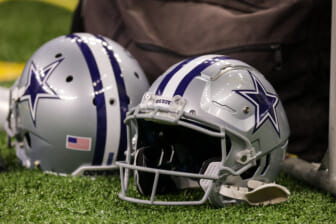 Also Read:
Dallas Cowboys looking to trade up in 2022 NFL Draft, a look at 3 scenarios

Much like the wide receiver position, the NFL draft will also be deep with talented offensive linemen. Keep in mind that Dallas still needs to improve its offensive line, and Kellen Diesch from Arizona State would be a good addition.

He’s being projected to go as high as a third-round pick, so if Diesch falls to the fourth, he’d be a steal. Diesch was very good at protecting the pass, which should be good news for Dak Prescott. Though he’ll need to work on his strength at the NFL level, he does have the foundational size to be a tackle at 6-foot-7. With the right coaching and an increase in size over time, Diesch could be a starter one day.

After the first two days of the NFL draft, the Cowboys can still round out their roster by picking up additional depth at linebacker, running back, and at corner.

Let us know what you think of our Dallas Cowboys mock draft and who you want to see the team draft in the comments section below.