Why the Dallas Cowboys make the most sense for Odell Beckham Jr. 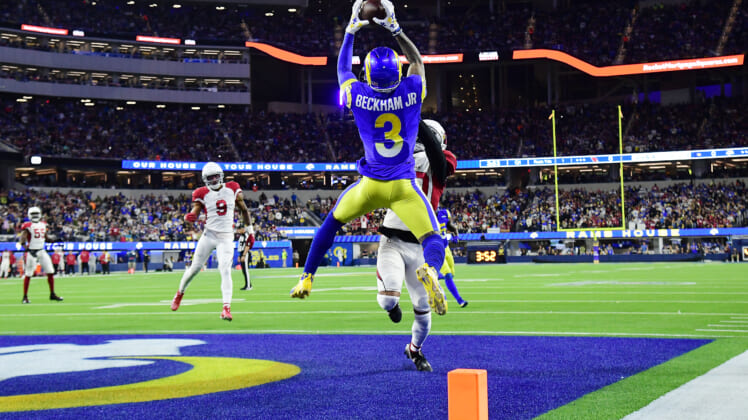 The Dallas Cowboys are frequently linked to the biggest names in football, whether they’re actually available or not. In this case, one of the most well-known players still available on the free agent market legitimately makes perfect sense for the ‘Boys. New Super Bowl champion Odell Beckham Jr. became a free agent at the start of the offseason back in March, yet he still doesn’t have a contract for the upcoming season.

But the factors that led up to this point have been very unique for OBJ. After tearing his ACL in front of millions of spectators during an inspired performance in February, he’s spent the offseason recovering from a surgery that typically takes anywhere from 9-12 months to recover from, if not more.

While his free agency market has yet to jump off, once he’s ready to show he can run routes and cut with confidence, Beckham’s likely to draw plenty of interest leaguewide. The Los Angeles Rams have loudly proclaimed all along that they hope to retain the three-time Pro Bowl receiver. But they also have Cooper Kupp, Allen Robinson, and Van Jefferson to go along with 2021 second-round pick Tutu Atwell who they likely want to receive more reps.

From OBJ’s perspective, the Rams may not make the most sense once he’s ready to hit the field, hoping to make an immediate impact. While the ongoing chemistry with Matthew Stafford would be nice to pick up where things left off, I think Beckham’s confident in his ability to make it work with any competent quarterback.

But if there’s one team who makes more sense than any other for Beckham, it’s the Dallas Cowboys.

The Dallas Cowboys traded Amari Cooper to the Cleveland Browns this offseason in an effort to save cap space. Mission accomplished, but they didn’t do much to bring in talent to replace Cooper’s production. They did select Jalen Tolbert in the third round of the draft, but relying on a rookie can cause problems, especially for a team with its eyes on the postseason.

Another receiver who’s working his way back from injury, and the likely Cooper replacement, is Michael Gallup. But he was recently on record saying that being ready for Week 1 is “not a reasonable possibility“. Gallup is currently on the team’s Physically Unable to Perform (PUP) list, and if he’s still there by the start of the regular season, he’s guaranteed to miss the first four games.

Aside from CeeDee Lamb, who’s set to reprise his role as Dak Prescott‘s top option, and their group of tight ends, the total production of the receivers left on the team totals 39 receptions and 425 receiving yards, all coming from Noah Brown.

This should be a major concern for Jerry Jones and Co. Prescott can’t rely on Lamb and Dalton Schultz alone, not if they have the goal of repeating as the league’s top-scoring offense. Offensive coordinator Kellen Moore has to be hoping he gets another receiver added to the roster in some form before camp breaks.

Dallas Cowboys can put the spotlight back on Odell Beckham

If the Cowboys still need a receiver when Beckham’s 100% healthy, it makes too much sense not to look into the 29-year-old pass-catcher. There was a time when Beckham was among the very best, if not the best receiver in football. While it’s been six whole years since OBJ flashed that Pro Bowl talent for a full year, he did get a chance to flash his skills again once he landed in LA.

Beckham had 593 receiving yards in 12 games with the Rams. That translates to roughly 840 yards through a full 17-game season. But you have to remember, OBJ also had to learn a new system and work on his timing with his new quarterback once he joined Matt Stafford. Who’s to say Beckham isn’t capable of much more?

We still saw glimpses of how Odell can dominate the game, even if it wasn’t throughout the contest. But that’s ok too. Whoever signs Beckham isn’t doing so with the idea that he’ll become their top option. He’s likely to seek another situation where he can play with an above-average quarterback who can help him compete for another Super Bowl. But I just don’t see him signing on to become a team’s third or fourth receiver like he would be doing in LA with the Rams. Why not try and put the star on his helmet, and potentially become Prescott’s second option?

In the media market Dallas plays in, even a small amount of success would lead to Beckham once again becoming an extremely popular player worldwide. Who knows, maybe he can even be the missing link to help them have more playoff success. But first, they have to get there. I’m not sure their current receiving corps has enough to scare opponents, but that might change if OBJ joined the crew.