Cubs get jump on Cards to take doubleheader opener 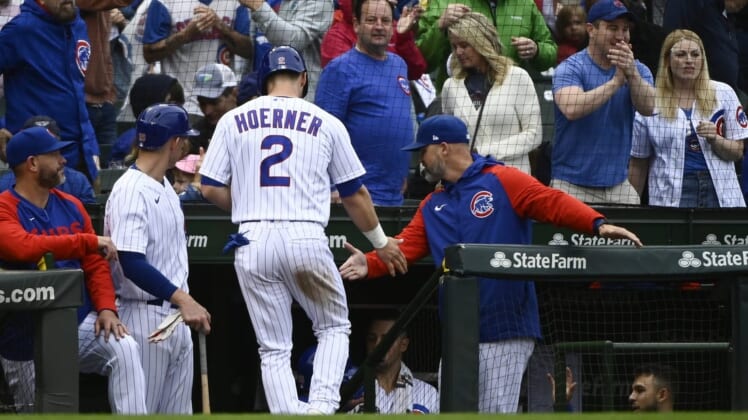 Frank Schwindel had a home run among his three hits and drove in two runs as the Chicago Cubs beat the visiting St. Louis Cardinals 6-1 in the first game of a split doubleheader on Saturday.

Matt Swarmer (1-0) allowed one run on two hits over six innings for his first career victory. He walked two and struck out five.

Cubs rookie Christopher Morel had three hits and extended a club record by reaching base in his first 19 games. Chicago outhit St. Louis 13-5 and won for the fourth time in its last five games.

Chicago took an early lead with a run in the second against Johan Oviedo (0-1) on a Morel force out, but left two aboard after Willson Contreras lined out to end the inning.

The Cubs extended their lead with two runs in the fifth after Schwindel blasted a one-out solo homer, his eighth, and Rafael Ortega delivered a run-scoring double.

Oviedo yielded three runs on eight hits over five innings in his season debut. He walked three and struck out five.

St. Louis got on the board with one out in the sixth on Tommy Edman’s solo homer off Swarmer, who was making his second career start.

The Cubs responded with two runs in the bottom of the sixth. Morel scored from third on Ian Happ’s sacrifice fly and Schwindel followed with an RBI single.

St. Louis threatened in the seventh inning and had the bases loaded with two outs, but Scott Effross struck out Edman on a disputed strike call to end the inning.

Cardinals manager Oliver Marmol was subsequently ejected for the first time in his managerial career after arguing the call.

St. Louis right fielder Corey Dickerson exited the game in the second inning with a left calf injury and was replaced in the lineup by Albert Pujols, who played in his 3,000th career game.