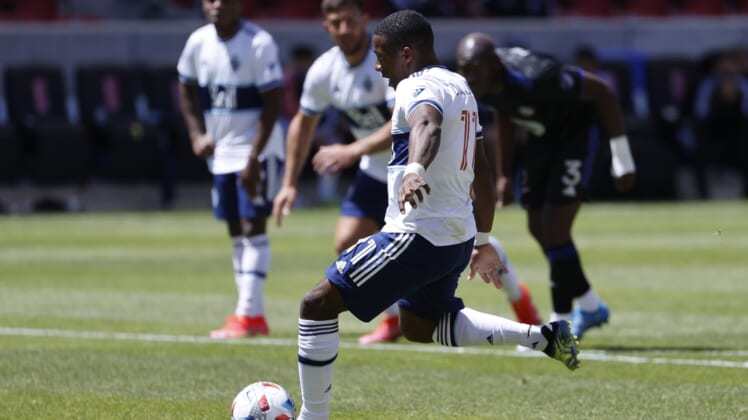 May 8, 2021; Sandy, Utah, CAN; Vancouver Whitecaps forward Cristian Dajome (11) takes a shot to score on a penalty kick in the first half against the CF Montr al at Rio Tinto Stadium. Mandatory Credit: Jeffrey Swinger-USA TODAY Sports

Goalkeeper Maxime Crepeau, who grew up playing in Montreal’s youth system, made four saves to post the shutout for the Whitecaps (2-1-1, seven points).

It was the first loss of the season for Montreal (1-1-2, five points).

The Whitecaps are playing home games at Rio Tinto Stadium, the home of Real Salt Lake, in their second season based in the United States because of coronavirus restrictions at the Canadian border.
They finished last season playing in Portland, Ore., and have made the best of it, winning six of their past eight games as the “home” team away from home. 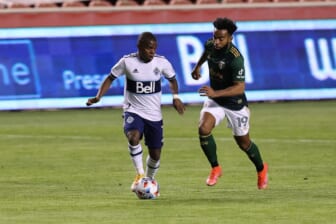 Dajome opened the scoring on a penalty kick in the 57th minute.

The penalty was awarded after Dajome took a through pass from Lucas Cavallini near the top left edge of the 18-yard box and was run over by Montreal defender Kamal Miller.

Dajome made a stutter step before blasting the penalty kick into the top right corner of the net, leaving Montreal goalie Clement Diop no chance despite guessing the right way.

The Whitecaps made it 2-0 in the 71st minute, as an unmarked Dajome headed home a corner kick by Deiber Caicedo from the top of the 6-yard box.

Crepeau’s best save came in the 29th minute following a Vancouver turnover in its own end of the field. Montreal’s Romell Quioto got the ball at the top left of the 18-yard box on a two-on-one. He passed to Bjorn Johnsen near the penalty spot, but Johnson’s right-footed shot was stopped by Crepeau with a diving save.

Crepeau also made a leaping catch of a 25-yard free kick from Montreal’s Mustafa Kizza in the 83rd minute.

Montreal’s Lassi Lappalainen put the ball in the net following a scramble in front of the goal in the 90th minute, but a video review determined teammate Erik Hurtado committed a handball before the ball got to Lappalainen.