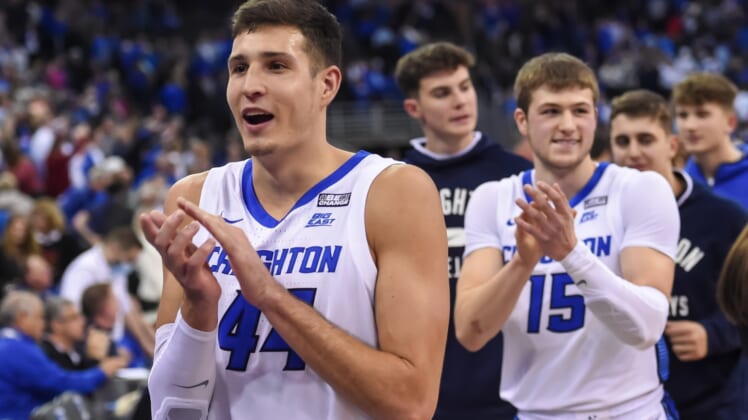 Marquette looks to snap a three-game losing skid Saturday afternoon when it hosts Creighton in a Big East Conference game in Milwaukee.

After starting the season 7-1, the Golden Eagles (8-5, 0-2 Big East) have dropped four of their last five games and have not won at home since Nov. 30 when they cruised past Jackson State.

Their most recent loss came against UConn 78-70 at home on Dec. 21, despite making 48.1 percent from the floor. Justin Lewis paced the Golden Eagles with 20 points and seven rebounds. Olivier-Maxence Prosper added a season-high 13 points. Darryl Morsell was inactive after entering health and safety protocol.

“We knew we were going to be missing Darryl and I thought our guys did a nice job trying to step up, step forward for him,” head coach Shaka Smart said. “This is unfortunately going to be part of this season around the country in college basketball. The other team’s not going to feel sorry for you. You got to find a way.”

Morsell is expected to be back in action Saturday.

Creighton (9-3, 1-0) is coming off a convincing 79-59 victory over Villanova on Dec. 17 after a game against DePaul was moved to Feb. 17 and a game against Georgetown was postponed.

Ryan Hawkins had 19 points and 11 rebounds to record his third double-double of the season and first since Nov. 16. Ryan Nembhard contributed 14 points and four assists, while Alex O’Connell had 12 points.

“We had a lot of young guys out there when the game was being decided,” head coach Greg McDermott said. “We just didn’t beat a good team, we beat a really good program and it’s hard to do.”

The Bluejays have won five of their past seven games and are 4-1 away from home this season, in both true road games and neutral-site settings.

Saturday’s meeting will mark the 93rd all-time matchup between the Golden Eagles and Bluejays. Marquette holds a 56-36 advantage but Creighton has won four of the past five meetings.