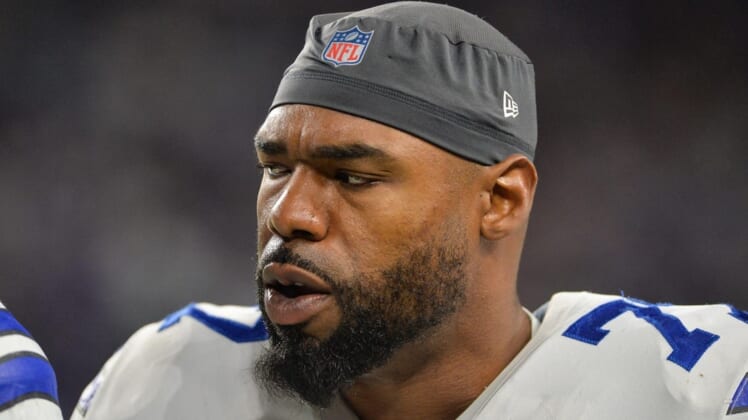 The Dallas Cowboys are awaiting word on the severity of the injury sustained by left tackle Tyron Smith in practice on Wednesday.

Initial reports indicated that Smith, an eight-time Pro Bowl selection, hurt his left knee and he would undergo an MRI exam on Thursday. However, ESPN reported late Wednesday night that Smith sustained a serious left hamstring injury that could keep him sidelined for several months.

Smith’s anterior cruciate ligament was intact based on early tests, per ESPN.

The injury occurred during an 11-on-11 drill, when Smith buckled while blocking linebacker Leighton Vander Esch, according to multiple reports. Smith walked off the field, and he later walked out of the locker room without a limp and with no knee brace or sleeve, the Cowboys’ website reported.

Left guard Connor McGovern said, according to the Dallas Morning News “I was in pass protect, and all the sudden, I see him on the ground. I didn’t even care … where the ball was downfield. I instantly just went to him.

“You saw literally everyone on the offense, even defensive guys, running over there. When a guy like that goes down — it doesn’t even matter who it is, this team is so close. Everyone is trying to get over there and see if they’re all right and get them back up.”

McGovern added that he later interacted with Smith in the locker room.

“He gave me a nice, reassuring grunt like he usually does,” McGovern said, according to the Morning News. “That’s one thing, playing next to him for so long, I can decipher his grunts. ‘I think he’s all right.'”

Smith, 31, is a two-time All-Pro. In 11 seasons with the Cowboys, he has started all 144 games he has played. Neck surgery cost him all but two games in 2020, and ankle injuries and time on the COVID list limited him to 11 games last year.