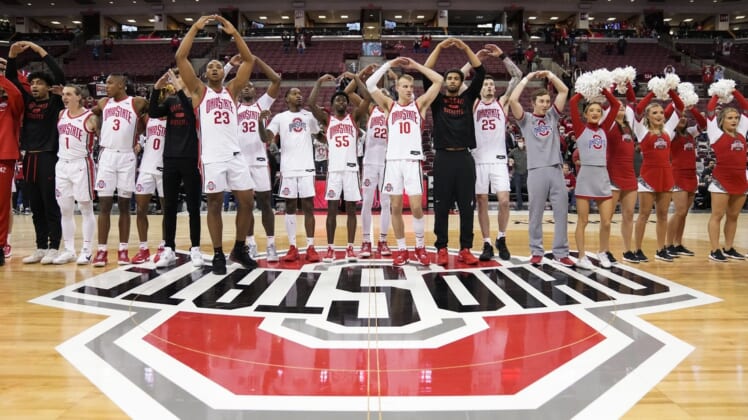 The Ohio State Buckeyes sing “Carmen Ohio” following their 85-74 win over the Towson Tigers in the NCAA men’s basketball game at Value City Arena in Columbus on Wednesday, Dec. 8, 2021.Basketball 06

COVID-19 issues within the Ohio State men’s basketball program forced the No. 15 Buckeyes into a pause Thursday, including backing out of their game against No. 21 Kentucky on Saturday in Las Vegas.

Ohio State (8-2) announced it has suspended all team-related activities.

“The players and staff will continue to be tested according to Ohio State protocols in consultation with the Big Ten Conference,” Ohio State posted to its website.

The game was part of the CBS Sports Classic and will not be made up. However, Kentucky posted on its website that it’s working with event organizers to find a new opponent.

“At the timing of this release, UK was still scheduled to make the trip to Las Vegas in hopes of finding a game,” the school posted.

No. 4 UCLA-North Carolina is the opener of the doubleheader in Las Vegas. UCLA canceled its game Wednesday night against Alabama State over virus-related issues.

Ohio State said the “status of future games is to be determined.” The Buckeyes are scheduled to play UT Martin on Tuesday and New Orleans on Dec. 28 before launching into its Big Ten schedule on Jan. 2 at Nebraska.