Could another star player be joining the Miami Heat? 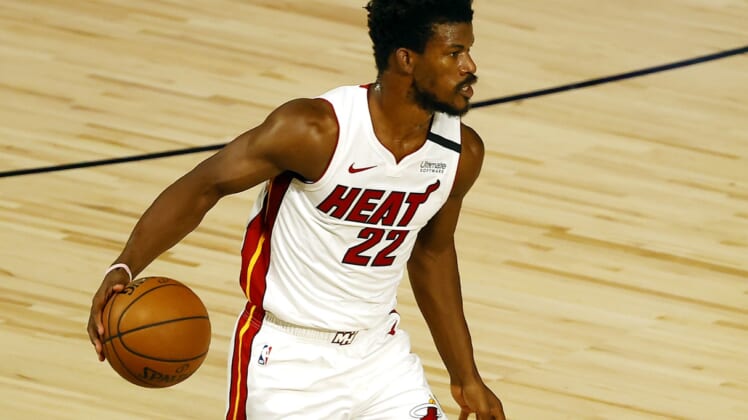 The Miami Heat are on the verge of an NBA Playoff appearance after a tremendously surprising regular season for the up-and-coming team.

Star guard Jimmy Butler has played a major role in that after he was acquired from the Philadelphia 76ers in a sign-and-trade last summer. Pretty much an enigmatic figure throughout his career, Butler seems to have found a home in South Beach.

He’s now seemingly openly recruiting other star players to join Miami while predicting that the team will add another top-end player once the 2019-20 season comes to an end.

“The organization is really good at getting what they want to win a championship. It’s gonna happen,” Butler said ahead of Friday’s regular-season finale against the Indiana Pacers, via ESPN (h/t NBA Central).

To be clear, it’s going to be hard for any team around the NBA to dole out a large sum of cash this coming October due to the economic downturn the COVID-19 pandemic has created. We still have no idea how the 2020-21 salary cap is going to look.

Even then, it’s never smart to question front office head honcho Pat Riley and his ability to make the shocking move. Adding Butler a year ago last month is the most-recent example of this. His Heat also succeeded during the regular season in large part due to the performances of rookies Tyler Herro and Kendruck Nunn.

Can the Heat acquire a star player?

Miami is set to see Goran Dragic’s contract expire in October. That’s $19.22 million coming off the books. That could help in this regard. Although, the Heat would likely have to go trade or sign-and-trade to acquire a top-level player. They simply won’t have the cap room outside of a mid-level exception.

This makes Kelly Olynyk’s expiring contract ($12.1 million) as well as either Herro and Nunn the likeliest assets to head out of South Beach in a trade. The Heat could also find a way to add Andre Iguodala’s deal to the mix after acquiring him back in February. That would leave Riley and Co. with about $30 million they can take in salaries.

As it stands, Miami is set to take on the Indiana Pacers in the first round of the 2020 NBA Playoffs. What we see from this team during the postseason at Walt Disney World will likely play a role in whether Butler’s prediction comes to fruition.