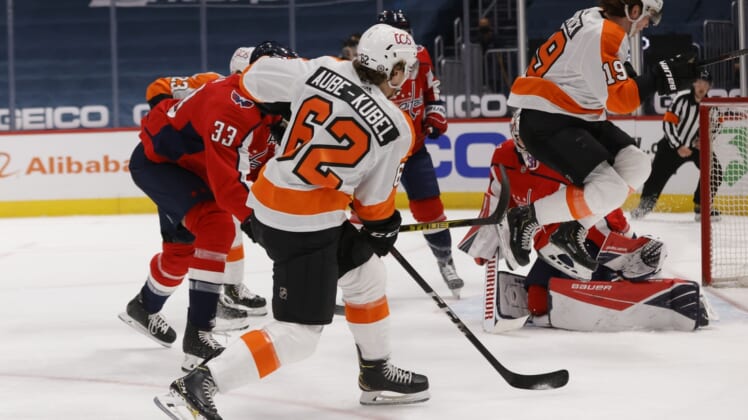 But since Washington (35-15-5, 75 points) did not win in regulation, that let the Pittsburgh Penguins clinch the East Division. Pittsburgh (37-16-3, 77 points) ended its regular season with a 1-0 victory over Buffalo earlier in the day. The Caps have one game remaining.

Lars Eller scored with 40 seconds left in regulation to force overtime. On the game-winner, Sheary took a quick pass from Nic Dowd and fired a shot that trickled between goalie Alex Lyon’s pads.

The injury-depleted Capitals were even more short-handed in this contest. Alex Ovechkin remained out with a lower-body injury. Evgeny Kuznetsov and goalie Ilya Samsonov stayed on the Covid-19 protocol list.

Nicklas Backstrom and John Carlson also sat out with lower-body problems. Tom Wilson injured his knee in the first period but returned.

T.J. Oshie then appeared to hurt his knee late in the second period and was ruled out with a lower-body injury. That left Washington with only 10 forwards during the third period and overtime.

In addition, goalie Vitek Vanecek, who has received much of the work in recent games, did not start. Instead, 39-year old Craig Anderson got the nod. This was just his second start of the season, and he had not played since April 15 but made 28 saves.

Neither team found too many scoring chances in the first period. Washington improved its defense from Friday’s 4-2 loss to the Flyers, and Philadelphia again made life tough for the short-handed Caps.

The song remained the same in the second period as neither team scored again. Carl Hagelin of Washington had the best chance to that point when he broke in alone, but Lyon (38 saves) stopped a backhander midway through the period.

Scott Laughton finally snapped the tie when he took a pass from James van Riemsdyk on the right wing and then fired a high shot past Anderson 3:42 into the third for a 1-0 lead.

But the Caps forced extra time when Eller celebrated his 32nd birthday by scoring on the short side, and Sheary then won it in overtime.