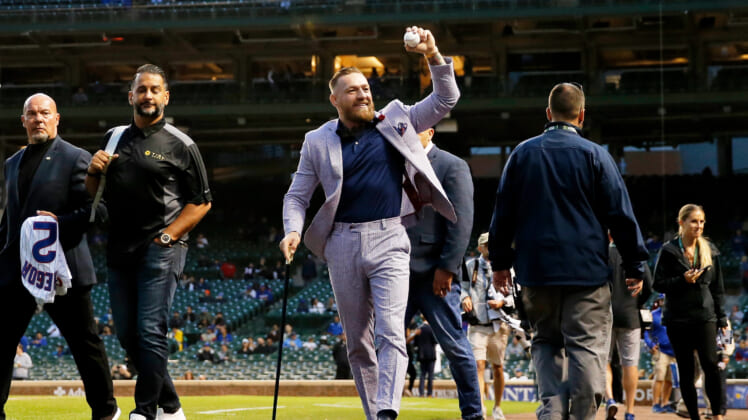 UFC legend Conor McGregor is known for throwing some of the hardest punches and landing some epic kicks while he’s in the Octagon.

The Ireland native might want to keep to that as his sport of choice.

McGregor was asked to throw out the first pitch ahead of the Chicago Cubs’ game against the Minnesota Twins at Wrigley Field Tuesday evening.

To say that The Notorious wasn’t up to the task would be a huge understatement. Just check out Conor McGregor sail one darn near into the seats — coming within inches of hitting a spectator.

The old saying that if you have a left-handed kid, you need to train him to pitch. Well, that obviously didn’t resonate with McGregor’s parents when he was growing up.

This is almost as bad as when 50 Cent threw out a first pitch ahead of a New York Mets game. You can be the judge.

It was definitely worst than the first pitch Anthony Fauci threw out ahead of a Washington Nationals game last season.

At the very least, Conor was styling with that awesome suit. He also has about $180 million to fall back on should this whole pitching thing not work out.