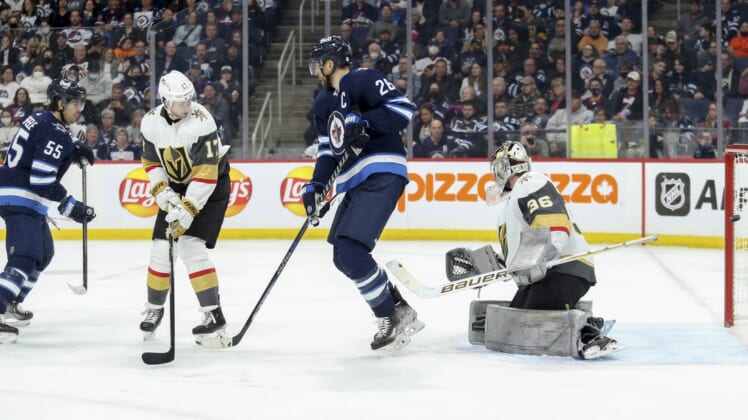 Connor Hellebuyck made 42 saves for his fourth shutout of the season as the host Winnipeg Jets blanked the Vegas Golden Knights, 4-0, on Tuesday night.

Nikolaj Ehlers and Mark Scheifele each had a goal and an assist and Pierre-Luc Dubois and Neal Pionk also scored goals for Winnipeg, which defeated Vegas for the fifth straight time and the seventh time in the past eight meetings. It marked the fifth straight game that Ehlers scored a goal, matching his career best.

It was the 28th career shutout for Hellebuyck, who improved to 6-0-1 in his last seven starts against Vegas. Kyle Connor extended his point streak to eight games with two assists and Blake Wheeler also had two assists for the Jets.

Rookie Logan Thompson, making his fourth consecutive start, stopped 22 of 26 shots for Vegas, which extended its franchise-record road losing streak to seven in a row.

Vegas, playing the second game of a back-to-back that began with a 3-0 loss at Minnesota on Monday, dominated a scoreless first period, outshooting Winnipeg, 17-4, and holding the Jets without a shot for the first 15:04 until Ehlers attempted a close-in wrist shot.

Winnipeg took a 1-0 lead at the 6:16 mark of the second period when Dubois backhanded a shot off a Wheeler centering pass for his 25th goal of the season.

The Jets appeared to increase their lead to 2-0 just 2:23 later on a goal by Evgeny Svechnikov at the end of a 3-on-2 rush. But the goal came off the scoreboard when Vegas successfully challenged that the play was offside.

The Golden Knights had two good chances to tie it right after that on a power play but Chandler Stephenson’s one-timer caromed off the post and Hellebuyck slid over and stopped William Carrier’s point-blank backdoor try with a pad save.

Winnipeg then made it 2-0 at the 15:14 mark when Scheifele, stationed in the high slot, redirected Ehlers’ long wrist shot past Thompson’s glove side for his 24th goal of the season.

Pionk then increased the lead to 3-0 at the 11:06 mark in the third period when he one-timed a Connor pass from the left faceoff dot inside the near post for his third goal of the season. Ehlers then made it 4-0 with his 19th goal of the season when he deflected a Scheifele shot past Thompson.