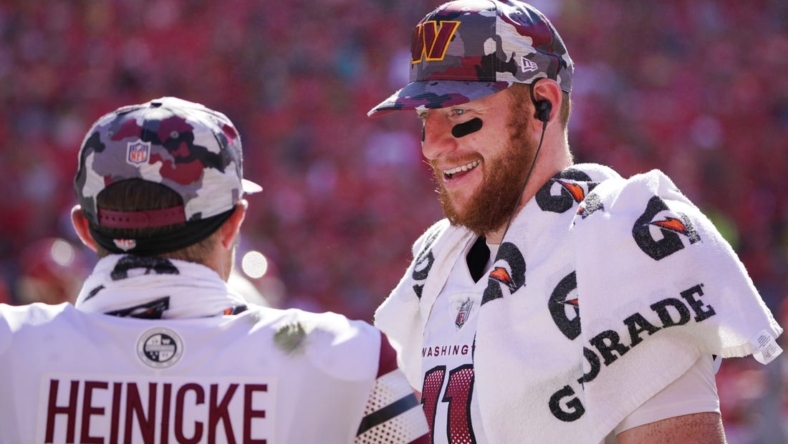 Commanders coach Ron Rivera plans to report back on the status of the starting quarterback job in Washington when a decision has been made.

Rivera said Tuesday he hasn’t gathered all of the medical information on Carson Wentz, who started the season as the QB1 in Washington until a fractured right ring finger sent him to injured reserve following a Week 6 win over the Chicago Bears.

Heinicke is 3-1 since Wentz went to the sideline with a 2-4 record and the Commanders looking like a team ready to dig into prospect evaluation for the 2023 NFL Draft. He capped the active run Monday night with a 32-21 victory over the Philadelphia Eagles, who were previously unbeaten and among Super Bowl favorites.

Heinicke said Monday night he was prepared to do whatever Rivera needed him to do — start or help the Commanders move forward with Wentz.

“My role this year was to be backup to Carson and, if he went down, be ready to play, and I feel like I’ve done that,” Heinicke said. “I’m just going out there and trying to win games for this team. And if they want to put Carson back in, great. I’ll be the best backup I can be to him and help him in any way I can. But for me right now, I just go in there and try to do the best I can.”

The 29-year-old Heinicke has five touchdowns and four interceptions in 2023, piloting a run-first offense to wins over the Eagles, Colts and Packers in addition to a three-point loss to the other NFC favorite, Minnesota.

“The first thing I’m going to tell everybody is not to get ahead of ourselves — first we’ve got to return him from practice and make sure he’s cleared and ready to go,” Rivera said Tuesday.

Rivera said he would talk to the medical team, front office, coaching staff and quarterbacks before anyone outside of the facility was informed of the Commanders’ direction.

“You guys will be the last ones to get notified,” he said.

Wentz can return to practice Wednesday, but the Commanders then have 21 days to activate him.

Acquired by the Commanders from the Indianapolis Colts, Wentz had 10 touchdowns and six interceptions this season. He was sacked nine times in a 24-8 loss to the Eagles on Sept. 25.