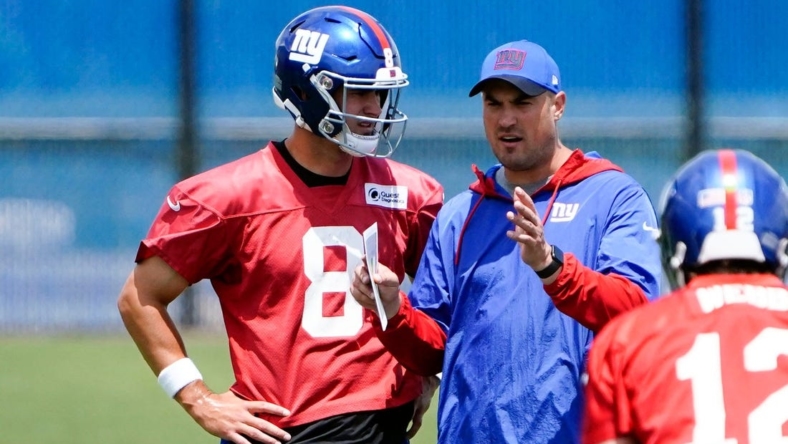 The Indianapolis Colts are expected to scour the NFL assistant coaching ranks after firing Frank Reich on Monday.

It has been a rapid rise for Kafka, a former journeyman quarterback and assistant with the Kansas City Chiefs who was given a preseason trial run by new Giants head coach Brian Daboll before being handed the play-calling duties. The Giants rank 24th in the NFL in total offense, but Kafka has been praised for how he has utilized star running back Saquon Barkley and the steady play of quarterback Daniel Jones through eight games.

Kafka, 35, would likely be seen as a big gamble if he were to land a head coaching job after just one season overseeing an NFL offense. Roman, however, has an extensive resume. The 50-year-old is in his 12th season as an NFL offensive coordinator and the Ravens are his third team, following stints with San Francisco and Buffalo.

Moore’s name has been tied to numerous openings over the past few seasons. He has been viewed as a potential successor to Cowboys coach Mike McCarthy, but so, too, has defensive coordinator Dan Quinn.

Ryans, meanwhile, is in his second season running the 49ers’ defense after serving three seasons as the inside linebackers coach.

The Colts were expected to be a strong playoff contender — if not a threat to win the AFC Championship — after acquiring veteran quarterback Matt Ryan over the offseason. He followed in the footsteps of Philip Rivers and Carson Wentz, two other veteran quarterbacks brought in by Reich, but Ryan was benched after Indianapolis began the season 3-3-1.

Two weeks later, the 60-year-old Reich was shown the door. He finished his Colts tenure with a 40-33-1 record, and the team now has a few months to determine what direction to take with its next head coaching hire.

Former Pro Bowl offensive lineman Jeff Saturday was named the interim coach, but he is not among the potential names being offered by SportsBetting.ag

Reich was the second domino to fall in the 2022 NFL head coaching carousel, but he almost certainly will not be the final one let go during the regular season.

Arizona’s Kliff Kingsbury was the favorite last week at SportsBetting.ag to be the second let go after Matt Rhule in Carolina. Kingsbury is now the heavy favorite at +150 to be the third after the Cardinals dropped to 3-6 on Sunday.

Kingsbury is followed by a pair of embattled first-year head coaches in Las Vegas’ Josh McDaniels (+400) and Denver’s Nathaniel Hackett (+500). Washington’s Ron Rivera is also +500, with the Commanders teetering on falling out of the playoff picture at 4-5.