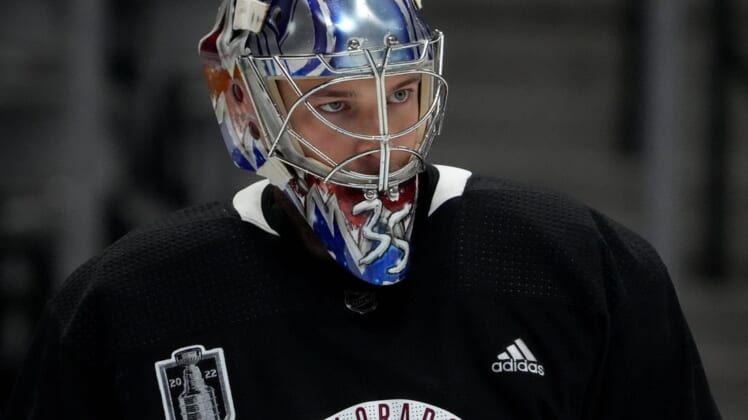 If the Colorado Avalanche need Darcy Kuemper in goal during the Stanley Cup Finals against the Tampa Bay Lightning, he’ll be prepared.

“I’m ready to go,” Kuemper told reporters Tuesday. “For me, it’s just sticking with the same routine, making sure you’re sharp in practice and treating it like a game situation, so that when the real game comes, you’re ready to go.”

The 32-year-old Canadian manned Colorado’s goal in 57 games during the regular season and has a 6-2 record in games he started in the postseason. His career goals-against average of 2.48 is third-best among all active goalies in the league.

But Kuemper hasn’t played in weeks, last seeing action on May 31, when he suffered an upper-body injury in Game 1 of Colorado’s series with the Edmonton Oilers.

Since then, his backup Pavel Francouz has stepped in and performed admirably. He’s been featured in six playoff games so far, all wins for the Avalanche, and holds a 2.86 goals-against average. Francouz previously stepped in for Kuemper when he suffered an eye injury in the first round.

Kuemper said Tuesday that he is 100 percent healthy now, but it’s unclear who will start between the pipes for the Avs on Wednesday night in Denver.

“Our guys are comfortable with our goaltending. Both guys can play,” Colorado general manager Joe Sakic said. “Our team has been committed defensively all season and we’re definitely confident in both goalies. They’ve both won six games in the playoffs. Our guys are excited.”