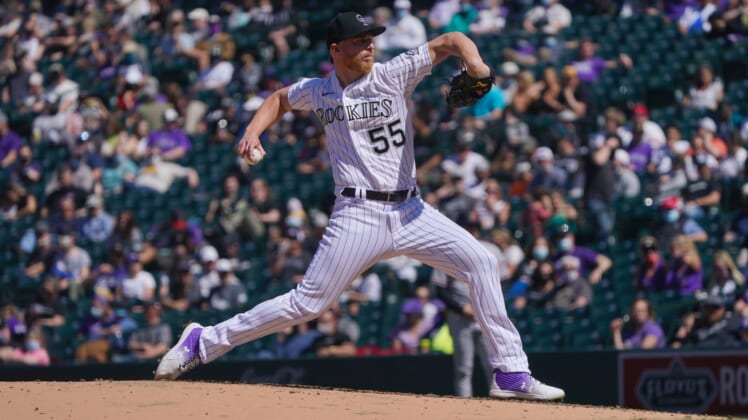 Trevor Story and Charlie Blackmon had two hits apiece and Daniel Bard got the last two outs for his second save for Colorado.

David Peralta had a triple to break up the no-hitter, Eduardo Escobar homered and Pavin Smith had two hits for the Diamondbacks.

Gray cruised through the first six innings but lost his no-hit bid when Peralta led off the seventh with a triple. Smith followed with a single to drive in Peralta. It was the first run for the Diamondbacks after being shut out for 15 innings.

Gray (1-0) got the next two outs but a two-out walk ended his day after 101 pitches. He allowed one run on two hits, struck out five and walked four in 6 2/3 innings.

The Rockies jumped on starter Merrill Kelly right away. Garrett Hampson and Raimel Tapia led off the first with consecutive singles and Hampson came home on Story’s double. Blackmon followed with a line drive off the scoreboard in right field that held him to a single but drove in Tapia and Story.

Ryan McMahon singled but Kelly got the next three to end the inning.

Colorado added another run in the second when Gray led off with a single, Hampson followed with a forceout and one out later, Story tripled to make it 4-0.

Nunez made it 7-0 in the sixth with his third home run after McMahon singled and Sam Hilliard reached on a fielder’s choice.

Kelly (0-2) left for a pinch-hitter in the seventh inning. He allowed seven runs — six earned — on nine hits and struck out one. He didn’t walk a batter.

Escobar hit a two-run homer off Carlos Estevez in the ninth.

Before the game, Arizona placed Ketel Marte on the 10-day injured list with a right hamstring injury. Marte suffered the injury running out a grounder in Wednesday’s night game and was helped off the field.