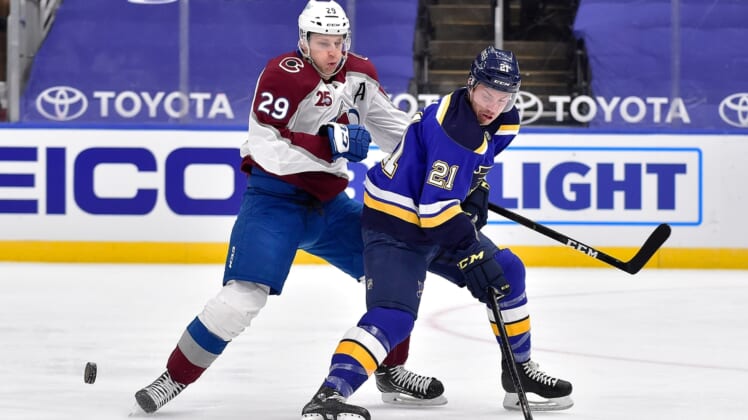 The Avalanche (31-9-4, 66 points) won their fifth straight game and beat the Blues for the fifth time in six tries this season.

Brandon Saad and Pierre Edouard Bellemare also scored for the Avalanche. Nathan MacKinnon had three assists to extend his point streak to 12 games and Devan Dubnyk made 25 saves to earn the victory.

Jaden Schwartz scored twice for the Blues (19-19-6, 44 points) and Tyler Bozak had two assists. Jordan Binnington made 25 saves in defeat.

The Avalanche played their first game since April 14 after another COVID-19 shutdown. They played without goaltender Philipp Grubauer and wingers Mikko Rantanen and Joonas Donskoi, who remain in COVID-19 protocol.

The Blues struck first with a power-play goal 3:18 into the first period. Schwartz stepped into the slot to bury a one-time shot off Bozak’s touch pass from the left circle.

But the Avalanche tied the game 1-1 with 32 seconds left in the first period. Tyson Jost stole the puck from Blues forward Zach Sanford in the offensive zone and sent Saad in alone on Binnington.

Burakovsky put the Avalanche up 2-1 with a power-play goal at 6:45 of the second period. Cale Makar shot wide and Burakovsky tucked the carom off the end boards inside the left post.

Then Burakovsky pushed Colorado’s lead to 3-1 with 8:31 to play. MacKinnon stole the puck on the forecheck and passed it to Gabriel Landeskog, who slid it to Burakovsky at the bottom of the right circle.

Before Binnington could slide over, Burakovsky scored into the open side.

Schwartz cut the lead to 3-2 by breaking in on left wing to convert Bozak’s lead pass from the right point. But Bellemare iced the victory with an empty-net goal.

The teams play again Saturday and Monday to conclude their season series.