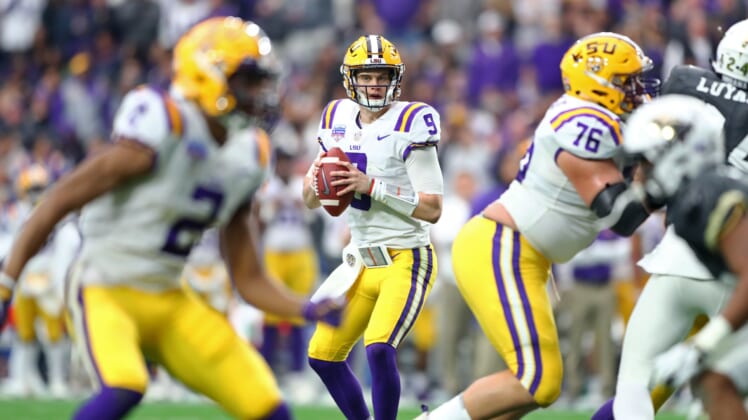 There are some downright gargantuan games on the college football Week 2 schedule, and plenty more to talk about outside of those games.

With the NFL coming back on Thursday night, almost all of the Week 2 games are being crammed into Saturday. It’s going to be glorious, and the best any of us can hope for is that the football gods grant us the gift of utter chaos.

These are the top storylines we’ll be focused on as the college football action takes place in Week 2.

Chance to pile up stats for top Heisman contenders

A few of the top Heisman contenders that wowed in Week 1 have a chance to rack up some impressive stat lines against cupcakes in Week 2.

Wisconsin’s Jonathan Taylor has a date with Central Michigan. Alabama’s Tua Tagovailoa will go against New Mexico State (and the spread for this game is patently absurd). Jalen Hurts and the Sooners are hosting South Dakota (but don’t tell him it’s going to be easy).

All three of these young men should have huge games this weekend, bolstering their case as true contenders for the top individual award in college football.

What will Hank Bachmeier do for an encore?

Boise State true freshman Hank Bachmeier showed plenty of grit and talent last weekend as he led the Broncos to a thrilling comeback win over Florida State. The kid looks like he still belongs in high school, but his game certainly tells us a different story: 407 yards and a passing touchdown in Week 1.

The Broncos will be at home against Marshall Friday night in a game televised nationally on ESPN2. Given the offensive firepower the Thundering Herd have at their disposal, Bachmeier may need another big statistical outing to keep Boise State in the win column. It should be a blast.

Last year, Jimbo Fisher nearly saw his Aggies pull off a stunning upset over Clemson in just his second game at the helm of this program. If not for a couple of missed field goals (including a block) and two turnovers, Texas A&M would have won. Now they get a chance to avenge their near-miss with another date against Clemson. This time it’s at Memorial Stadium, upping the ante in terms of level of difficulty.

Kellen Mond had a wonderful outing last week against Texas State. But that was not a viable tuneup for what he’ll face going against Clemson’s dynamic defense Saturday. On the other side of the ball, the Aggies will have to be perfect defensively to slow down Travis Etienne, Trevor Lawrence and Co. We don’t envision an upset taking place (Clemson favored to win by 17.5 points). But stranger things have happened.

Can Justin Fields build off his impressive debut?

Georgia transfer Justin Fields had a strong first game as the starting quarterback for Ohio State last Saturday against Florida Atlantic. He showed off his blazing speed with a 51-yard touchdown run on the game’s opening possession. Then he passed for four more touchdowns to lead the Buckeyes to a blowout win in the season opener.

Saturday’s showdown against Cincinnati should present Fields with a stiffer challenge. The Bearcats ranked 11th in the nation last year in total defense and are coming off a four-turnover effort against UCLA in which they allowed just 14 points. Ohio State has much more talent offensively than the Bruins, but Fields will still have to be on his best behavior to come out smelling like roses in this one.

The Owls were overwhelmed up front by Ohio State’s awesome defense in Week 1. But Chris Robinson and the rest of Florida Atlantic’s offense should find more of a comfort zone playing at home against UCF Saturday evening. In particular, FAU’s running game should take off, which will open up big plays through the air.

The same cannot be said for FAU’s defense, however. The Knights have a ton of offensive weapons at their disposal and are coming off a 62-point effort in Week 1. Former Notre Dame quarterback Brandon Wimbush leads a potent unit that should continue to pile up the points against the Owls.

The over-under is set at 69 points. We’re taking the over.

Bounce-back game for the Ducks

Oregon outplayed Auburn for the majority of Saturday night’s big showdown in Arlington. Unfortunately, when things got tense, the Ducks got flustered and ultimately allowed the Tigers to feast in a comeback win.

Justin Herbert showed off his world-class arm, and showed talent evaluators he’s an NFL-caliber quarterback. Unfortunately he was without many of his top receivers. Perhaps as a result head coach Mario Cristobal was unwilling to unleash the senior quarterback at key moments in the second half.

Oregon has a home game against Nevada in Week 2. The Wolf Pack have some momentum after coming back against Purdue Saturday night. However, we’re not expecting anything less than a huge win for the Ducks as they rebound from their Week 1 flop.

Key road test for Scott Frost and the Huskers

Nebraska was lucky to get out of Week 1 with a win — against Souith Alabama. Seriously. Two defensive touchdowns and a punt return for six saved the Huskers in a big way, as Adrian Martinez and his offense floundered around like a fish out of water.

Things only get more difficult in Week 2, as Nebraska travels to Boulder for a game against a Colorado team that put up 52 points last weekend. If Martinez doesn’t rebound in a big way, this game could get out of hand quickly.

Can the Tar Heels contain the ‘Canes?

The return of Mack Brown to North Carolina was a huge success in Week 1, as the Tar Heels knocked off South Carolina. Next up is an ACC showdown against Miami, which lost by four points to Florida nearly two weeks ago in Week 0.

This will be a very different challenge for the Tar Heels. While Miami’s offensive line is certainly susceptible to attack, freshman quarterback Jarran Williams is highly mobile and showed that pressure isn’t going to rattle his cage. The key for North Carolina’s defense is containing DeeJay Dallas, who has explosive abilities.

No. 23 Stanford is going to be in Southern California for a late-night Pac-12 rivalry game against USC. The Trojans are reeling after seeing starting quarterback JT Daniels go down with a season-ending knee injury, but their defense looked darn good in Week 1 against Fresno State.

On the other side, Stanford starting quarterback K.J. Costello is officially questionable to play with a head injury suffered on a brutal hit against Northwestern on Saturday.

We could see a battle of backups in this one, with Davis Mills starting for Stanford. We already know that true freshman Kedon Slovis is starting for the Trojans. In such a crucial conference game, it’s going to be interesting to see who handles the pressure, and who crumbles.

Burrow vs. Ehlinger in the biggest game of Week 2

Last weekend, Joe Burrow and Sam Ehlinger combined to throw nine touchdowns as their respective teams romped to season-opening victories. Watching Burrow throw darts to the tune of 23-of-27 passing in a practically flawless performance was the more surprising of the two.

While the two quarterbacks should feel good about themselves heading into Week 2, both will need to be particularly sharp Saturday night in Austin. LSU’s defense is extremely fast and has playmakers at all three levels. Texas is also very talented, albeit young, on the defensive side.

It takes a team to win. But all eyes will be on these two quarterbacks as they lead their highly-ranked teams into the biggest game of Week 2.