Colin Kaepernick throws at Michigan spring game, willing to be an NFL backup 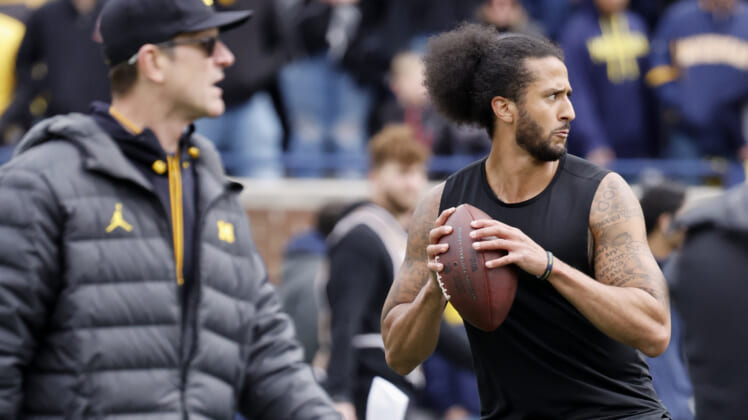 It’s been since the 2016 since the NFL has seen Colin Kaepernick throw a pass in a game. For those football scouts and evaluators with any interest at all in giving the dual-threat quarterback another chance, they got that opportunity today at the Michigan Wolverines spring game.

Since Jim Harbaugh is the current Michigan coach, Kaepernick used his relationship with his former head coach with the 49ers to throw during halftime of the exhibition effort.

Adam Schefter shared this clip, showing off Kaep’s final throw of the day, and if there’s anyone who questions whether the 34-year-old QB has lost his fastball, well guess again. The dude can still launch footballs downfield at an impressive rate.

Will Colin Kaepernick get another shot in the NFL?

All of this brings us back to the same question we’ve asked for the past five seasons. Will Colin Kaepernick ever play in the NFL again?

There’s no reason for a team not to treat him as any other player or prospect. Remove the name, remove anything you know about him as an individual and evaluate his football skills. Can he outperform any of the current QBs on the roster? Yes. There’s no doubt in my mind that Kaepernick can’t be better than several backups around the league. Heck, judging by some of the current starters, he might even offer stiff competition to take the leading role.

The problem lies with the fans, honestly. For whatever reason there are fans who simply don’t like the guy based off some political beliefs, and his kneeling that was what, six years ago? I’m not sure how that could still rile people up so much to this day, but it’s time to move onto the next issue.

At the end of the day Kaepernick still has talent, and the fact that owners, general managers, and some coaches have basically blackballed him out of the league is asinine.

Will Kaepernick get another chance? It seems unlikely. A few throws during halftime of a spring game is unlikely to change history. I’d love to be proven wrong. Until Kaepernick is signed, there’s no way for teams to suggest they’re doing everything in their power to put a winning roster on the field.

I’m not saying he’s this MVP-level talent or anything close, but the fact that Colin K can’t even get an official workout while other retreads are given countless chances is beyond me.

For what it’s worth, Kaepernick is willing to be a backup, according to Josina Anderson. Which, again, what do teams have to lose?

You know what they say about second chances, and how everyone deserves one, well here’s Kaepernick who hasn’t harmed a soul, and he can’t get another shot to save his life. What’s up with that?