It’s not a secret that former Super Bowl quarterback Colin Kaepernick is attempting to make a comeback. Kaepernick last appeared in a game as a member of the San Francisco 49ers back on January 1, 2017.

It’s now been more than five years since Kaepernick has played. Despite this, multiple current NFL players have helped him while the embattled figure attempts a comeback. That includes multiple quarterbacks and wide receivers working out with Kaepernick.

Years removed from settling a collusion case against the NFL and its teams, we might finally be at the point that the 34-year-old quarterback could make a return to the gridiron. If so, here’s a look at four ideal landing spots.

Fresh off trading franchise signal caller Russell Wilson to the Denver Broncos, there’s certainly a spot for Kaepernick in the Seahawks’ quarterback room. It’s somethnig Carroll discussed in his post-trade press conference with the media.

“Does that guy deserve a second shot? I think he does,” Carroll said about Kaepernick last week.

Meanwhile,Seahawks wide receiver Tyler Lockett is one of the big-name individuals who has worked out with Kaepernick in recent days.

From an on-field perspective, Kaepernick would be a perfect fit in the Pacific Northwest. Right now, Drew Lock would be the Seahawks’ Week 1 starter. Seattle is also in on a Baker Mayfield trade. However, he seems to prefer the Indianapolis Colts.

Texans general manager Nick Caserio made it clear following the Deshaun Watson blockbuster trade that they are going to leave no stone unturned when it comes to adding a veteran quarterback to the mix.

“We’re certainly cognizant of what’s going on in the league. We’ve done a lot of work and we’ll look at every option, and ultimately we’ll do what we feel is best for our situation.”

Houston feels confident that Davis Mills is ready to take over as the full-time starter after the Stanford product played pretty well as a rookie. Even then, there’s a need for a veteran to either compete with him over back up the young signal caller.

Sure the Texans’ front office hasn’t been what we’d call open-minded when it comes to some of the issues Kaepernick has been fighting for. Front office head Cal McNair has also been in the news for some racially-insensitive comments he made during the COVID-19 pandemic. Perhaps, signing Kaepernick would show that the Texans have changed their ways.

After missing out on the Watson sweepstakes, these Saints find themselves stuck between a rock and a hard place. They could very well re-sign Jameis Winston. However, he’s coming off a torn ACL. Meanwhile, Taysom Hill is nothing more than a gadget player. General manager Mickey Loomis could look to the trade block with Mayfield and Jimmy Garoppolo being options. He could also simply bring back Winston and provide him with a veteran backup.

It might have been a half-decade ago, but these numbers are better than pretty much every backup quarterback in the NFL right now. New Orleans would also be an ideal landing spot in terms of its role in the entire Black Lives Matter movement. 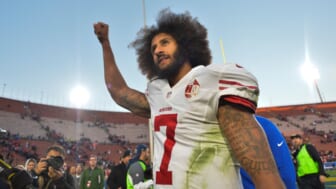 Colin Kaepernick returns to the Bay

Wouldn’t this be something? Five years after throwing his last pass as a member of the 49ers, Kaepernick returns to back up young quarterback Trey Lance. It almost makes too much sense with San Francisco set to trade Garoppolo and Nate Sudfeld as the only other quarterback on the roster.

Kaepernick would be able to provide veteran leadership to Lance, helping him take over as the face of the 49ers’ franchise. As for the 49ers, they are not in a great cap situation. Adding someone with a history of success, albeit a while ago, is something the championship contenders might have to do moving forward.