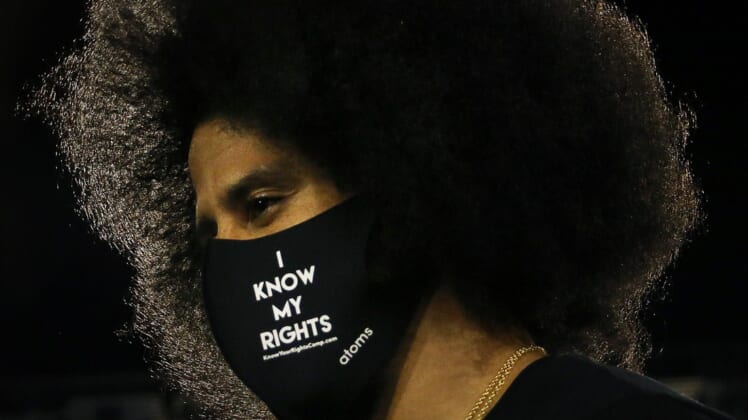 Colin Kaepernick gets inducted into the Nevada Sports Hall of Fame during halftime of the game against Idaho State at Mackay Stadium in Reno on Sept. 11, 2021.Ren Kaepernick Unr 02

Colin Kaepernick has been out of the NFL since 2016, but the former San Francisco 49ers quarterback hasn’t given up hope of rejoining an NFL roster. And he might have the help of a prominent former divisional rival in making his NFL dream reality.

On Sunday, Kaepernick wrote on social media that he has been training for the past five years with an eye on a possible return, but that he missed working with genuine NFL receiving talent.

For The past 5 years I’ve been working out and staying ready in case an opportunity to play presented itself. I’m really grateful to my trainer, who I’ve been throwing to all this time. But man, do I miss throwing to professional route runners.

Who’s working?? I will pull up

It didn’t take long for Seattle Seahawks wide receiver Tyler Lockett to take him up on his request, with Lockett tweeting back to Kaepernick, “Let’s do it bro! Me and my brother will come run routes for you!”

Let’s do it bro! Me and my brother will come run routes for you! https://t.co/MPvZTKA8PG

Kaepernick, 34, and Lockett, 29, faced off several times as divisional rivals in the NFC West, with Kaepernick recording just a 2-6 record against the rival Seahawks as a starter.

The Seahawks are currently in the market for a quarterback after they traded away longtime starter Russell Wilson to the Denver Broncos earlier this month.

Kaepernick, a two-time member of the NFL’s Top 100 list, famously took a knee during the national anthem as a protest against racism and police brutality during the 2016 NFL season. He has been unable to make a return to the league since.

During the height of the Black Lives Matter movement in 2020, NFL Commissioner Roger Goodell came out in support of a team taking a chance on re-signing Kaepernick, saying “I welcome that, support a club making that decision, and encourage them to do that.”

Around that same time, Seahawks head coach Pete Carroll expressed regret about not signing the quarterback to some kind of deal after he became available in 2017.

“The rest of that story is one that I regret that didn’t happen in some fashion. I wish we would have contributed to it, because again, he deserved to play,” Carroll said.

“I thought at the time and just in our situation as a backup, man, I didn’t feel it was right at that time, so I had to make that football decision. It was about our team and the situation. We had our starting quarterback and all of that, and it wasn’t going to be the open competitive situation that I’d like to think all of our spots are because Russell is such a dominant figure and all that. That’s what happened.”

Kaepernick has thrown for 12,271 yards with a 72-30 touchdowns-to-interceptions ratio on 59.8 percent passing throughout his career. He also led the 49ers to a Super Bowl appearance (XLVII) following the 2012 season.

Lockett, a former first-team All-Pro, is coming off a 2021 season in which he posted 73 receptions for a career-high 1,175 yards with eight touchdowns.